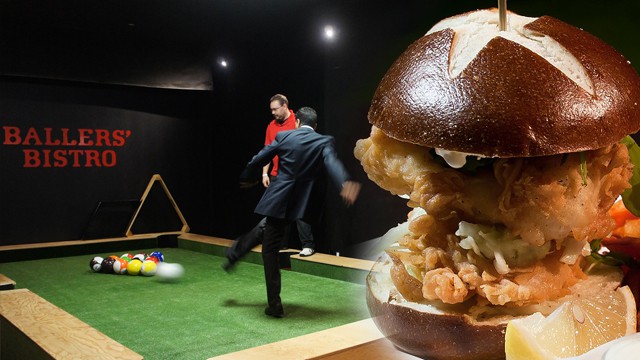 If you’re always on the lookout for something unique to do, you might be pumped about snookball and casual dining facility Ballers’ Bistro — a very cool activity/resto concept scheduled to open its doors in Heartland today.

The name itself is a little punny (it’s a bistro with balls that’s ironically — and thankfully — more affordable than the name implies), but the concept is fresh. It’s basically a snookball and restaurant combo that offers people a place to play, eat and drink.

But what, you ask, is snookball?

Snookball is basically foot billiards. The hybrid sport was invented by two French entrepreneurs and essentially involves playing snooker/pool on a giant board with your body. It adds a little more physical activity, as the rules are the same and the only difference is you use your feet rather than a cue.  In the case of Ballers’, the balls — designed to look like standard billiard balls — are actually soccer balls (I used “balls” way too many times in that sentence, but I can’t think of another term for them. Circular playthings? Spherical activity pieces?). If you want to take a look at the rules, click here.

As to why this new and relatively rare sport is coming to Mississauga, Jack Wong, the bistro’s president, says his team is simply giving people more entertainment options.

“There’s a need [for something like this],” he says. “There’s a lack of entertainment in the area. We wanted to give people something that would wow them. We first heard about the new concept that originated in France from people in Hong Kong and we couldn’t find many locations in North America, so we wanted to bring something new to the country.”

Wong and his team aren’t new to scouting international trends and delivering them to Mississauga. One of his partners at Ballers’ Bistro owns De-Code Canada, a popular room escape destination.

“We have room escapes, archery tag and axe throwing [in Mississauga], and this brings even more options to our audience. It’s good for businesses and families.”

The Heartland facility boasts 7,600 sq. ft. of space and can fit up to 190 people. As for whether or not the idea will catch on, Wong says they’ve already generated interest.

“What differentiates us and the concept is the wow factor. People haven’t seen this before. The moment you step in, you see the pool tables and you’re amazed.”

While snookball is the bistro’s specialty, the menu isn’t an afterthought. The resto offers edamame ($5.49), supreme nachos ($12.99), a plethora of poutines including the Ballers’ Foie Gras Poutine ($19.99 and probably worth every penny because foie gras poutine), flatbread pizzas (prices vary), a foie gras burger ($24.99), beef wellington ($29.99), pasta, steak and more. “When we came up with the idea [for the bistro], I thought ‘what makes a really unique restaurant?’” says Wong. “The menu had to be unique. Personally, I was raised in Montreal and the foie gras dishes were inspired by that. Our partners have a lot of food industry experience and some have worked with 3 Brewers, Canyon Creek and Lonestar. Our head chef Ashour Shamoun has over 25 years of experience working in kitchens. We wanted mainstream dishes with a different touch, so we have gourmet poutines and a hangover burger.”

In terms of playing, you can walk in with a few friends or book a table (standard lounges and VIP spaces are typically booked by the hour) in advance. A standard snookball lounge costs $58 an hour and can fit up to 10 people (although the bistro says smaller groups of four-to-six people are ideal). VIP lounges that boast more privacy, bigger TVs and extra comfort cost $68 an hour. Meals are not included in these prices, but Wong says the bistro can create tailored packages for bigger parties.

You can also eat while you play, so you can get a full meal and a game in if you’re pressed for time or just super hungry for foie gras fries.

If you want to plan a big event, such a corporate function, bachelor/bachelorette party or birthday party, you can contact the bistro to start the planning process.

As for whether or not Wong and his team plan to take snookball beyond Sauga, the answer is yes.

“We’re looking for a second location east or north of Mississauga right now,” he says.

While the concept might spread beyond our borders, you have to visit Heartland first to test it out.