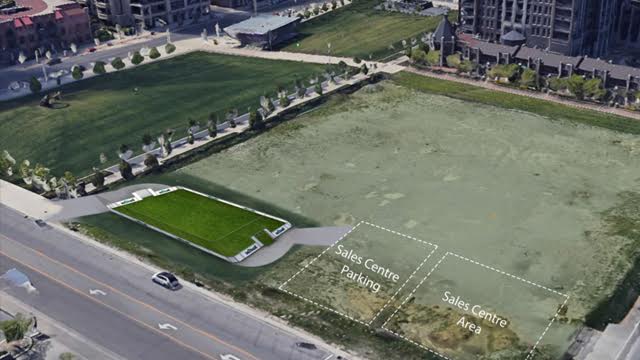 Sports fans, rejoice–a unique boxed soccer pitch (the first of its kind in Canada, to be exact) is about to enjoy its grand opening in Mississauga.

Residents in Mississauga’s City Centre first learned about the incoming pitch back in June. Now, the facility, named the Daniels Community Field, will officially open on Sept. 30.

The pitch has been constructed in the City Centre neighbourhood as part of a nine-year, $180,000 sponsorship agreement made between the city and the Daniels Corporation. As for how it works, the GreenCourt pitch is a durable welded aluminum design soccer system that is 15 metres by 30 metres. It includes artificial turf surface, soccer boards, two goals and netting and can be reconfigured to smaller dimensions. The pitch, which will be named after the development company that has built a number of properties in the area, will add a little recreational green space that the urban jungle that surrounds it.

“As a soccer enthusiast and advocate of outdoor sports and recreation, I am thrilled to be able to announce this upcoming installation of a boxed soccer pitch for the residents of Ward 4 and for those living within the downtown,” said Ward 4 Councillor John Kovac. “This is exactly what I had envisioned for our downtown core, not just a public amenity but a boxed soccer pitch that will rival the ones that I have seen in urban, European locales. This will be the very first of its kind here, not just in Mississauga but in all of Canada! I am proud of the work that has gone into securing this partnership and I look forward to continuing to promote active and healthy lifestyles here in our city.” The pitch will be located at Prince of Wales Dr. and Living Arts Dr. for a minimum of three years.

As part of the grand opening festivities, residents will be able to meet and receive autographs from members of the Canadian Arena National Soccer Team and enjoy complimentary treats, prizes and soccer giveaways.