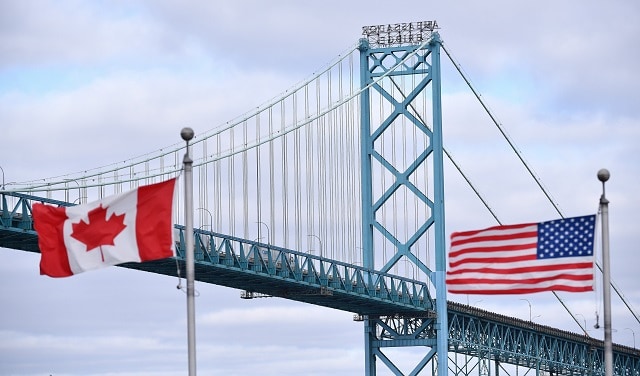 The United States will remain on the sidelines for now as Canada gamely welcomes back fully vaccinated American citizens and permanent residents.

As of midnight Sunday night, non-essential U.S. travellers who have had a full course of a Health Canada-approved COVID-19 vaccine will again be allowed on Canadian soil.

To be eligible, travellers must live in the U.S., have allowed at least 14 days to pass since their last dose and show proof of a negative molecular test for COVID-19 that’s no more than 72 hours old.

They are also required to use the ArriveCAN app or online web portal to upload their vaccination details.

Denis Vinette, vice-president of the travellers branch of the Canada Border Services Agency, says the agency learned a lot when fully vaccinated Canadian citizens were allowed to return last month.

Vinette says about half had to be turned away during the first week because they hadn’t received one of the four vaccines approved by Health Canada, or had not waited the full 14 days after their last shot.

“We found that many travellers — while they believed they met the full vaccination requirements — in fact did not, for one of two reasons,” Vinette said in an interview.

“One, it had not been a full 14 days since they’d received their second vaccination shot, and secondly, there were a lot of individuals who received a non-Health Canada vaccine who believed they would have been exempt from the quarantine requirements.”

“We had a lot of individuals who didn’t have a full understanding of what applies and what does not apply,” Vinette said. “I expect the same here. I think that from a vaccination perspective, the vaccines being administered in the U.S. are approved in Canada, so I would expect that might be a lesser issue.”

The U.S., for its part, has been mum on when it might begin to ease its own restrictions on non-essential Canadian travellers at land crossings. Air, sea and rail travellers are exempt.

The White House did say last week that it is exploring whether to require discretionary visitors to be fully vaccinated when the time comes to ease restrictions, although it remains unclear whether that discussion specifically includes Canadian travellers.

The U.S. has maintained stringent travel limits on a number of foreign countries, including China, India, Ireland, Iran, South Africa, Brazil and the 26 European countries without border controls, known as the Schengen group.

The borders with Canada and Mexico, however, are widely seen as falling into a different category, in part because of the close trade ties between the three countries as well as the fact that visitors can enter without the help of a private-sector company like an airline or cruise ship operator.

Observers also detect a measure of unease in the White House at the idea of allowing travel to resume from Canada without doing so at the southern border, where an ever-present flow of would-be refugees continues to pose a political challenge for President Joe Biden.

While a short-lived labour dispute with Canadian border agents was resolved promptly last week, travellers looking to enter the country after Sunday would still be wise to pack some patience, given the likelihood that a lot of people will be getting turned away.

Some people “will not have perhaps the totality of information they require to be able to present themselves to enter the country for a discretionary purpose,” Vinette said.

“They’ll be denied entry to the country; they’ll simply be sent back to the U.S., then they can choose to comply with all requirements and then seek re-entry after that case.”

Travellers arriving by air can also expect delays, given that it already takes a lot of time.

Toronto’s Pearson International Airport, one of four in Canada that has been allowed to accept flights from outside the country, has been warning people that the international arrivals process could take more than three hours.

Canadians are growing more comfortable with air travel, which means more people in the airport, all of them dealing with augmented security and health checks thanks to COVID restrictions, said Pearson spokeswoman Beverly MacDonald.

“There are a variety of factors that impact wait times upon arrival, including additional health screening due to government travel requirements, vaccination status, immigration processing, multiple flights arriving at the same time and more,”  MacDonald said in a statement.

Pearson saw nearly double the amount of passengers in the second quarter than during the same months in 2020 – though at an average of 11,500 a day it’s still significantly down from that quarter in 2019, when an average of 140,000 passengers flowed through the airport.

In June, the Montreal-Trudeau International Airport saw about 10 per cent of its 2019 volumes, which rose to 20 per cent in July, and they expect to see around 30 per cent in August.

“Even if we are used to attending to a far larger number of passengers in our facilities, there are longer wait times to be expected especially at the international arrivals level, depending on the time of the day,” said spokeswoman Anne-Sophie Hamel.

The federal government is currently planning to allow vaccinated visitors from outside the U.S. to return to Canada for non-essential reasons as of Sept. 7.

— With files from Allison Jones and Elena De Luigi in Toronto