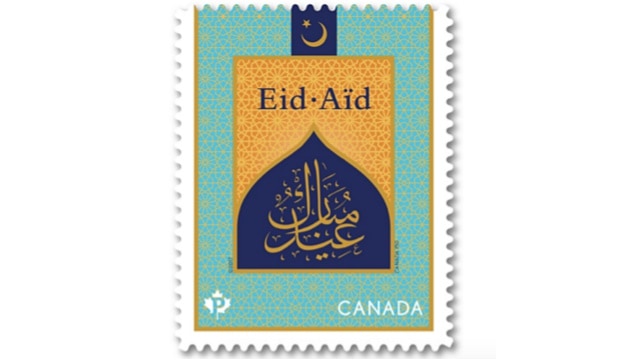 There are currently stamps celebrating Diwali and Christmas, and Canada Post plans to unveil a Hanukkah stamp later this year to expand the roster.

The Muslim festival Ramadan began a few days ago, and now Canada Post has unveiled an Eid stamp that recognizes Eid al-Fitr and Eid al-Adha, two of the most important festivals celebrated by Muslims in Canada and worldwide.

The design, as expected, features Islamic elements. The Arabic script on the stamp reads “Eid Mubarak,” which translates to “Have a happy Eid” or “Have a blessed Eid.” The text appears under a pointed arch, which symbolizes the division between sacred and worldly space in Muslim culture.

Similar to Islamic architecture, the stamp features deep blues, gold, and yellows, as well as a geometric pattern. The new moon atop the stamp signifies the start of Eid.

Eid al-Fitr marks the end of Ramadan, wherein Muslims fast from dawn until dusk for a month. This is one of the most distinctive practices of Islam.

Roughly translated to the Festival of the Breaking of the Fast, Eid al-Fitr falls on the first day of the tenth month of the Islamic calendar, Shawwal (this year in Canada, around June 26, 2017).

On the day of Eid, many Muslims congregate in mosques or in open spaces, where they will perform a special ritual prayer prescribed for Eid.

For Eid al-Adha, or the Festival of Sacrifice, Muslims commemorate Abraham’s willingness to sacrifice his son as an act of obedience to God.

Further, the festival marks the end of the annual Hajj pilgrimage to the Kaaba in Mecca, Saudi Arabia, which is the holiest site in Islam.

It falls on the tenth day of the twelfth month of the Islamic calendar, Dhul Hijjah (around September 2, 2017, depending on when the new moon is seen).

Both celebrations include special ritual prayers, lavish meals, visits with friends and family, gift-giving, and acts of charity.

Canada is home to over one million Muslim residents, and the stamp aims to reflect and celebrate the diverse faiths in Canada.

The stamp was designed by Doreen Colonello and Erin Enns of Entro Communications. The Permanent domestic-rate stamp measures 28 millimetres by 35 millimetres, is printed in six colours plus a varnish, and is available in booklets of 10.

A collectible framed enlargement of the stamp is also available.