Can Public Art Help During LRT Construction in Mississauga? 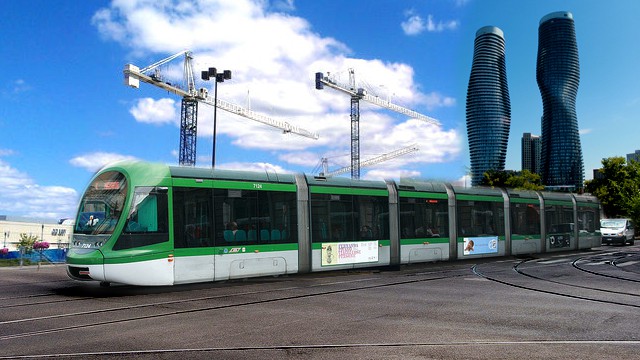 Member of Mississauga City Council and senior staff recently embarked on a “fact finding mission” to Minneapolis-St. Paul, Minnesota to meet with local transit and city officials in that jurisdiction and ask about the LRT system they have there.

While I’m sure they were in awe of how wonderful the system is running now and how it has resulted in incredible development in the core areas of the Twin Cities, I wonder if they inquired as to how they dealt with the construction woes that no doubt were evident on the way to the Promised Land.

There’s no way to completely clamp down on people complaining about traffic delays from construction as we build our own LRT along Hurontario in the next couple of years, but is there a way to make it at least somewhat fun?

Look no further than Minneapolis-St. Paul’s itself. Back around two years ago St. Paul, Minnesota embarked on a project whereby a local community development organization partnered with local businesses. Modest grants were provided to local artists to come up with art installations, murals, or performances to remind people that those local businesses were still worth going to while construction was underway.

There was a local coffee shop in the city called the Black Dog Cafe, where they created a giant black dog puppet and sent it out patrolling the streets reminding patrons and non-patrons alike that the Black Dog is still open and ready to welcome customers.

Other projects included beautifying walls with murals or perking up bus stops with potted trees. A printmaker and designer gave away totes with literature explaining the benefits of the forthcoming light rail. The latter, I think, is something Mississauga can embark on while the LRT construction is going on.

I’m not saying the city doesn’t give out enough information on the LRT — in fact, they give out plenty in the various public meetings. But continuing that level of information availability, especially during the period when people directly experience the presence of this massive public transit infrastructure project, would be crucial in giving people a sense that their legitimate concerns are respected and that the LRT is a worthy project for the city and the community.

Hopefully, Mississauga picked up some pointers from the Twin Cities in terms of easing citizens’ anxieties when their light rail construction was happening.

Hurontario is a main street in this city, and there are not a lot of so-called “mom and pop” shops along the way, but using art as a means to put the situation in a more positive light wouldn’t hurt.

There is already an outreach to the Mississauga Arts community in terms of how the trees wrapped up for the winter months along the section of Hurontario from Burnhamthorpe to around Square One Drive. Perhaps this is a sign that the city is seriously looking into getting the arts more involved in the beautification of Hurontario, even as the LRT construction gets rolled out and is fully underway.