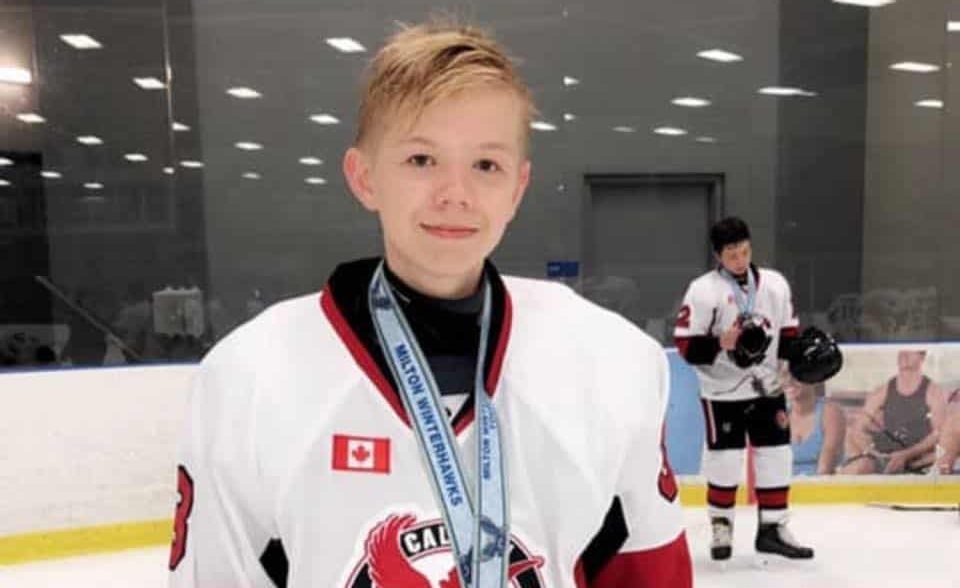 The Town of Caledon has named an outdoor ice rink after 14-year-old Reese Meyer who died of cancer in October 2020.

The Town of Caledon is honouring the memory of a 14-year-old Caledon Hawk who died of cancer by naming a rink after the boy.

Reese Meyer was just 13-years-old when he was diagnosed with a malignant brain tumour.

Nicknamed “The Lion,” Meyer died less than a year later on Oct. 3, 2020 but not before leaving a lasting impact on those who knew him and the Caledon community with his humour, spirit and “gentle strength.”

Caledon Town Council has approved naming the new permanent outdoor rink at the Caledon East Community Complex “Reese’s Rink” in memory of the young athlete and musician who family and friends have described as an amazing person with a quiet strength, and the ability to make things easier on those around him.

“The Caledon teen, never one to vie for the spotlight, captured the hearts of the Caledon community with his determination to beat the cancerous growth that he nicknamed “Liam,”‘ reads a video memorial posted on YouTube.

The Caledon teen’s battle with cancer became a rallying cause for the local hockey community, with the Mississauga Steelheads donating tickets sales from a hockey game to the Meyer family.

Former NHL player and the Great One himself Wayne Gretzkey even reached out to Reese in a Facebook video.

The town said naming the rink after Meyer will inspire the youth of our community to explore their passions in sports, the arts or education, and will be a constant reminder to live life like the young boy did – to the fullest with the innocence and curiosity of youth.

Meyer played right defence wearing the number 3 for the Caledon Hawks, and his father Glenn was also part of the coaching staff.

Reese was a gifted pianist as well as hockey player and excelled at school, and his legacy “is a simple lesson and reminder about love,” his obituary reads.

Meyer’s favourite hockey quote was “Win or lose, make the other team remember the day they played you.”

Resse’s Rink is open depending on weather and ice conditions at the Caledon East Community Complex.