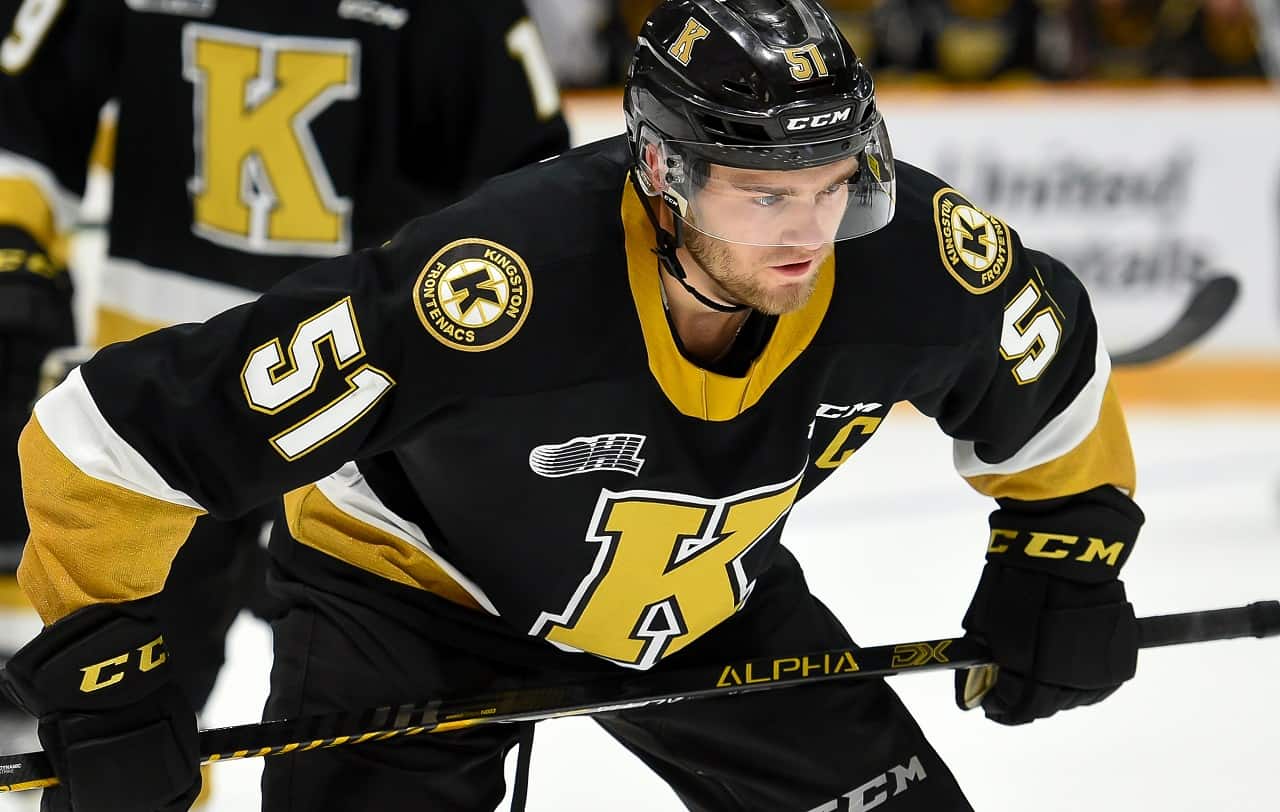 While Shane Wright and Nathan Staios have had distinctly different progressions through developmental hockey, both Halton Region pucksters were recognized in the Canadian Hockey League awards tonight.

On the eve of the Memorial Cup final, where Staios and the Hamilton Bulldogs will face the host Saint John Sea Dogs, the CHL handed out its national awards on Tuesday night. Wright, the 18-year-old centre from Burlington who will be one of the first players taken in the National Hockey League draft next week, received the CHL Top Prospect Award. Staios, an overage player from Oakville, received the CHL Defenceman of the Year Award.

Wright has been under the microscope of being a potential NHL first overall pick since 2019, when he was cleared to enter the Ontario Hockey League as an an exceptional status player. Prospect watchers have expended plenty of bandwidth over whether the Montreal Canadiens, who will have the No. 1 choice in the draft in their home arena on July 7, will draft Wright or Slovak power wing Juraj Slafkovsky.

For his part, Wright tallied 32 goals and 94 points across 63 games for the Kingston Frontenacs this season to finish in the top 10 in OHL scoring. He also captained Kingston and had 18 games with three or more points. Wright was also the NHL rookie of the year in 2019-20, and led Canada to a gold medal in the 2021 world men’s under-18 championship.

Seven of the last 14 winners of the award went No. 1 overall in the NHL draft, including Connor McDavid in 2015 and Oakville’s John Tavares in 2009.

Nathan MacKinnon, who just led the Colorado Avalanche to the Stanley Cup, did not get the top prospect award in ’13 before he was chosen No. 1 overall. It went to Seth Jones of the Portland Winterhawks. The next day, the MacKinnon-led Halifax Mooseheads defeated Portland in the Memorial Cup champioship game.

The other finalists for the top prospect award were Nathan Gaucher of the Quebec Remparts and Matthew Savoie of the Winnipeg ICE.

Staios was recognized for a season where he was the leading defenceman scorer in the OHL with 15 goals and 66 points across 59 games, while helping the Bulldogs finish first overall before capturing the league championship. His regular season included 17 multi-point nights.

Five years ago, Staios entered the OHL as a No. 17 overall choice of the Windsor Spitfires. After two seasons in Windsor, his former-NHLer father, Bulldogs general manager Steve Staios, arranged a trade to bring him closer to home.

The Bulldogs were in retooling mode in 2019-20 before the COVID-19 pandemic halted the season. The younger Staios got some exposure to minor pro in the American Hockey League while the OHL was on hiatus, before breaking out big-time to support Hamilton’s championship season.

Lukas Cormier of the Charlottetown Islanders and Olen Zellweger of the Everett Silvertips were the other finalists.

Mississauga Steelheads forward Owen Beck also captured the CHL Scholastic Player of the Year Award, which is bestowed upon the player who best combines on-ice performance with academic success.

Beck, of Port Hope, Ont., had an academic average of more than 94 per cent while balancing several secondary school courses including math and data management, advanced functions, world religions, kinesiology, chemistry, and English, the CHL said. On the ice, Beck played all 68 games and notched 51 points to help the Steelheads finish fourth in their conference.

Steelheads coach James Richmond was edged out for Brian Kilrea Coach of the Year Award by Jim Hulton, who used to be an OHL bench boss in Mississauga.

Hulton got the nod after guiding Charlottetown to a team-best 103-point season and its first appearance in the Quebec League final. Hulton’s coaching journey has included both OHL franchises in Mississauga. He spent a season with the Mississauga-St. Michael’s Majors in 2007-08 and was also the first head coach of the Mississauga IceDogs from 1998 to 2000.