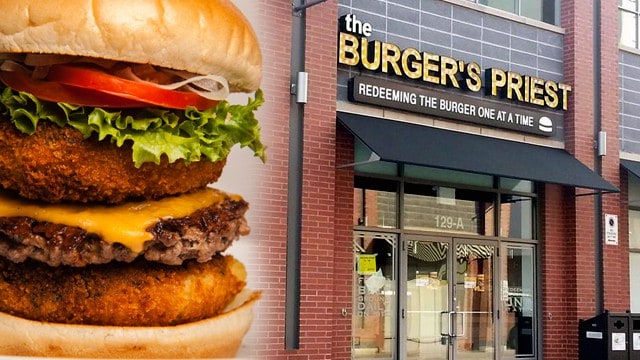 The gates of heaven open and you can hear the angels sing in Mississauga….aaaaaaaaaaahhh.

And there is divine reason for it — Mississauga will be blessed with the acclaimed Burger’s Priest and owner Shant Mardirosian says he expects the restaurant to open the first week of August.

The estimated six week wait will be dreadful, but worth it.

As for where to get to your fix, the restaurant is set to open up in the old Quizno’s location in the Ten Restaurant & Wine Bar plaza in Port Credit.

“Port credit is a very community oriented area and I wanted to have my first Mississauga unit in a tight knit community” says Mardirosian.

Mardirosian is the brains behind what is known to be one of the best burger joints around — and he’s a Sauga boy himself. He opened up his very first location back in 2010 in The Beaches area in Toronto and is now on his 6th location right here in his hometown. You can find out where Shant’s inspiration came from here.

It’s finally our chance to dig our teeth into the incredible burgers without having to endure the sometimes painful drive to the T.O. locations, especially the most popular ones that Mardirosian calls “The High Priest” and “The Priest”.

Oh, and if you visit the website and answer The Priest’s skill testing question, you will get access to the “secret menu.”

Burger’s Priest Restaurant and Menu Concept:
Burger’s Priest is a classic American cheeseburger joint that uses fresh ultra premium beef that is prepared and cooked with old school methods. The meat is ground almost every hour and the burgers are cooked on a flat top griddle using the old smash-technique.

The High Priest and The Priest:
The Priest is a combination of the Cheeseburger plus The Option, which is a vegetarian dish that includes cheese stuffed Portobello mushrooms that are breaded and deep-fried. The High Priest is BP’s version of the “Big Mac.”

Celebrity Sightings:
The Iron Sheik, Cast of Suits, Anthony Bourdain, and  The Food Network’s – You Gotta Eat Here. Harry Potter himself, Daniel Radcliffe even told ET Canada that, “It’s quite simply the best burger I’ve had”.