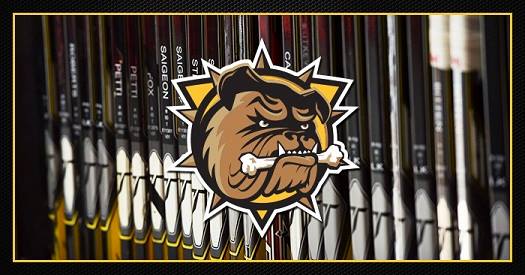 There’s a new Bulldog in town — and just in time for the home opener.

There’s a new Bulldog in town — and just in time for the home opener.

Bulldogs have signed Ryan Humphrey to a Standard Players Agreement!

The 16-year-old forward made a big impact in training camp following up a very strong campaign for the Honeybaked U16 program which saw Humphrey total 24 goals and 40 assists for 66 points across 75 games playing both at the Midget level as well as the HPHL U16.

To begin his 2019-20 season Humphrey was selected to be a part of the USA Select 16 development camp where he posted an impressive four goals and three assists for seven points in five games.

“We are thrilled to have received a commitment from Ryan,” said Bulldogs president and general manager, Steve Staios. “He has all the characteristics of what it means to be a Hamilton Bulldog.”

The Bulldogs Home Opener is Saturday (Sept. 21) at 7 p.m. at FirstOntario Centre.

Country singer David Boyd Janes will be playing a pregame show at 6 at the Budweiser King Club and again during intermissions.

There will also be special giveaways, face painting, a photobooth and look back at the Bulldogs through the years.