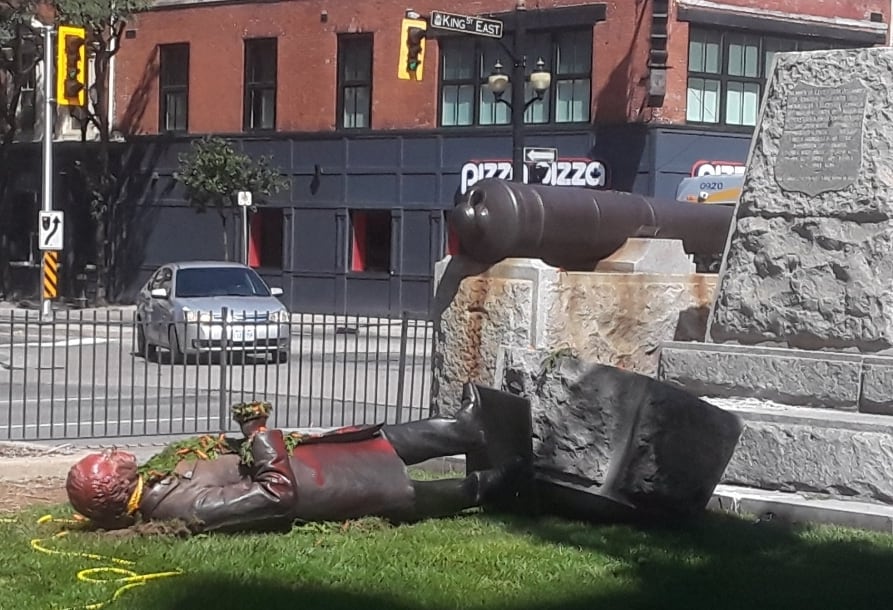 The statue of Sir John A. Macdonald in Hamilton is no more.

This afternoon (August 14), protestors tore down the statue at Gore Park while an Indigenous Unity Rally took place at City Hall.

The toppling was very quick. A person climbed and spray-painted the police camera, another climbed a ladder, about a minute later, the statue was pulled down. pic.twitter.com/JF5U8NGinZ

Breaking: Statue of Sir John A. Macdonald in Gore Park has been torn down by protestors #HamOnt pic.twitter.com/cRWdNQYO9R

The move comes following outrage from some Hamilton residents after city council voted in July against a motion introduced by Ward 3 City Councillor Nrinder Nann to take the Macdonald statue down and put it into storage.

Mayor Fred Eisenberger and Ward 14 Coun. Terry Whitehead were absent for the vote.

Macdonald’s likeness and name has been removed from public spaces across Canada due to his role in the expansion of residential schools in the late 19th century, which has recently stirred more controversy after the remains of over 1,500 Indigenous children had been found through First Nations-led searches.