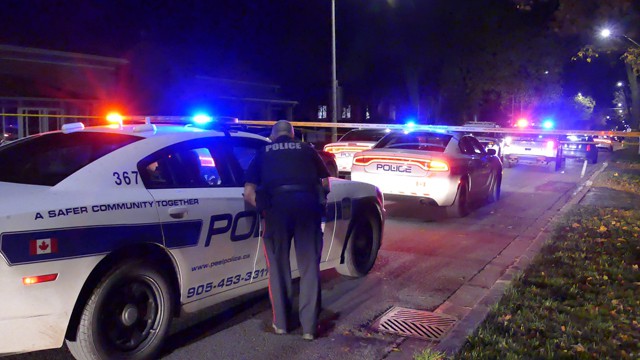 The victim in Saturday’s Streetsville shooting has been identified as 23-year-old Toronto man Deshawn Brandon Nicholson.

On Saturday, Oct. 22, police received a disturbance call around 3:56 a.m. and went to 327 Queen St. S. in Mississauga to investigate. The callers who dialed 911 reported hearing possible gun shots. Upon arrival, police found a male with obvious signs of trauma. Emergency crews attempted to revive the victim, but he succumbed to his injuries.

Police have confirmed that Nicholson died of a injuries “consistent with a gunshot wound.”

There is no information on a possible suspect at this time.

Investigators from the Homicide and Missing Persons Bureau are asking anyone with any information about the murder to please come forward.

Investigators would like to speak to witnesses who may have been in the area of 327 Queen Street South in Mississauga at the time of the murder.

Anyone with information relating to this investigation is asked to call investigators at the Homicide and Missing Persons Bureau at (905) 453-2121, ext. 3205. Information may also be left anonymously by calling Peel Crime Stoppers at 1-800-222-TIPS (8477), by visiting www.peelcrimestoppers.ca or by sending a text message to CRIMES (274637) with the word ‘PEEL’ and then your tip.