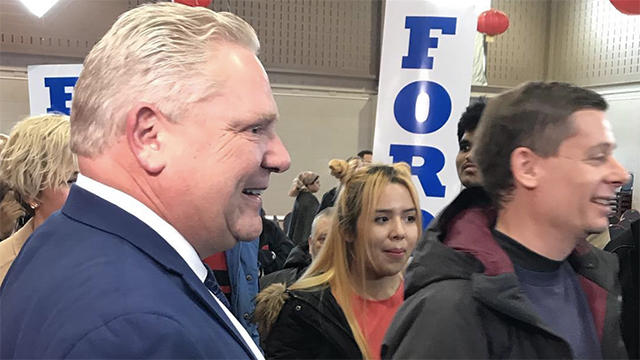 After months of polling, campaigning, mini scandals and sniping back and forth between political parties, Ontarians have finally passed their judgment on this provincial election campaign….and the province has gone blue.

The governing Liberals, who ruled the province for the last 15 years, are currently struggling to have enough seats to get official party status (a party needs 8 seats for said status), while a small sliver of history was being made out in Guelph, where voters elected the first Green MPP to the Ontario Legislature, the party’s leader Mike Schreiner.

In another piece of unique history, this will be the first time in the modern era where a party leader ascended to the premiership with the least amount of political experience possible.

While he was a former Toronto city councillor for one term, Ford has never held a seat at Queen’s Park, let alone served in the Legislature; indeed one of the questions he struggled to answer was how a bill becomes a law during one press conference.

However, Ford can count on at least having a strong team of PC candidates elected that could form a relatively stable core of a cabinet. Candidates such as former leadership rival Christine Elliot, Vic Fedeli (the current PC interim leader), finance critic Lisa MacLeod, and veteran MPP Ted Arnott carrying their ridings with relative ease.

In Mississauga, it looks like Hazel McCallion’s call to elect a PC government has been heeded, as the Tories are leading in all six of the city’s ridings. In neighbouring Brampton, the results are a bit closer, but it is clearly a fight between the PCs and the NDP.

Ford will now be faced with the task of governing the second largest economy in Canada, after the federal government itself, as well as keeping his promises of $1 beers, 10 per cent cut in gasoline taxes, cutting hydro bills, and ‘creating jobs’ and ‘stimulating the economy’ as he often repeated on the campaign trail.