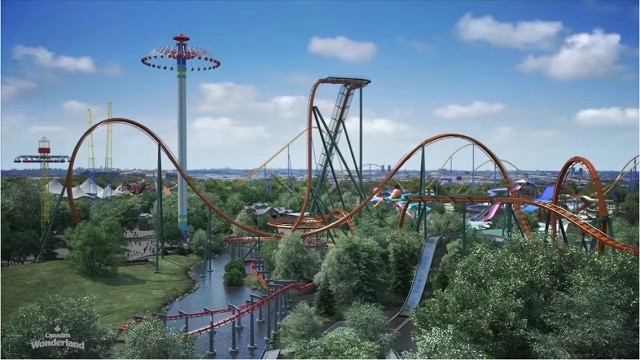 A brand new roller coaster is coming to Canada’s Wonderland, and it’s the very first of its kind in Canada.

The amusement park’s newest coaster, the Yukon Striker, will be open for thrill-lovers to enjoy when the park opens its gates for the 2019 season.

“Yukon Striker promises an exhilarating journey along its 3,625 feet of mountainous track where guests will be treated to a spectacular view stretching to the Toronto skyline,” the park said in a news release.

The Yukon Striker is Canada’s first and only dive coaster, which — for the uninitiated — is a type of roller coaster that features at least one near-vertical drop, meant to simulate the feeling of free-falling.

So what does the Yukon Striker’s drop look like?

“The coaster features a ‘hold and dive’ element where riders will literally be hanging on the edge of their seats, on one of three wide, floorless trains, breathlessly awaiting the 90-degree, 245-foot drop.”

The ride will pause for a few seconds before the drop, giving passengers a chance to enjoy the view at the top before plunging downward into an underground tunnel and emerging above ground moments later.

Not only is the Yukon Striker the first dive coaster in Canada, it’s also poised to break records as the longest, fastest and tallest dive roller coaster in the world.

As if that all wasn’t exciting enough, the park announced last Friday that the ride is now also the only dive coaster in the world with a 360-degree loop.

The Yukon Striker will be located in the newly themed area Frontier Canada, designed to represent “the rugged Yukon backcountry during the Klondike Gold Rush era of the late 1890s.”

The park won’t be open until Thursday, May 9, but if you’re itching to get a look at the new ride, you’re in luck — Canada’s Wonderland has uploaded a video showing a first-person view of what the coaster will look like in action.

The coaster, which has been in construction since January 2018, was just completed today (Monday, February 4).

“Our talented team has worked for more than a year to bring this complex project to completion,” said Peter Switzer, Director of Construction and Maintenance at Canada’s Wonderland.

Next, the trains will be installed while the loading station and landscaping are completed. After that, the ride will undergo a thorough testing process, running each train through hundreds of cycles with water dummies that simulate human passengers.