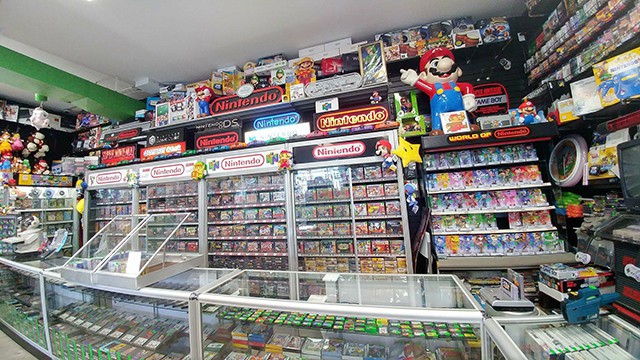 We’ve got amazing news for you.

A brand new store specializing in both modern and retro games has just opened its doors in Mississauga.

We Got Gamez, which also operates a location in Ajax, has just opened a second location in Central Parkway Mall.

“The fun part or bringing all the retro to current generation video games, consoles and accessories begins,” We Got Gamez owner Kamal Lalli wrote on the company’s Facebook page just prior to the Nov. 1 opening. “It’s like a blank canvas. A place for all gamers. A true video game destination, that will be #notyouraveragevideogamestore.”

The store calls itself a one-stop shop for all retro and modern gaming needs and boasts a pretty impressive selection of inventory, offering shoppers a great selection of consoles that include Xbox One, PS4, Xbox 360, PS3, Wii U, Wii, PS2, PS1, N64, SNES, NES, Gamecube, Game Boy, ds and 3ds games.

As for what inspired Lalli to bring his one-of-a-kind operation to Mississauga, he says an ideal location became available and provided an opportunity he couldn’t pass up.

“Mississauga had an exciting video game store, Video Games Plus, that was [closing in Central Parkway Mall]. Basically, the mall has been known to have a video game store for two decades. I renovated the store completely and I thought to myself, “it’s worth a shot, there’s a built-in client base.”

Lalli says people have responded favourably to the changes.

“I did the floors, the ceilings, the walls, etc. I took down two walls. The store feels airy, it’s 820 square feet,” he says. “Video games and Nintendo stuff are very colourful. A lot of people questioned the black walls, but it makes everything pop and become more vibrant.”

Although the store is open and serving customers, the grand opening celebration will be held on Saturday, Nov. 18 and attendees can expect deep Black Friday-style discounts and other perks.

“We will have better than Black Friday sales for the Saturday (Nov. 18) and Sunday (Nov. 19) and this will only happen at the Mississauga location. Basically, we’ll introduce ourselves to the community.”

People, Lalli says, are already excited about the store in general.

“Reception has been awesome. Mississauga has a vibrant community that appreciates old and new video games,” Lalli says before going to add that one couple recently purchased a Super Nintendo and an assortment of games and couldn’t wait to rush home and play.

He also said the store has attracted shoppers from within and outside the GTA.

As for what sets him apart, he says his selection of rare and hard to find merchandise and games gets people through the doors.

“We sell everything–video game collectibles, Mario and Pokemon plushies. It’s rare to see any store with our stock level. We have original Nintendo games, with up to 10,000 to 15,000 in stock. The games range from $1 to $10,000. There’s a lot of unique things that we offer. One of our games, Stadium Events, sells upwards of $15,000 USD and I’m the only store in Canada that owns that game.”

As for what else to expect at the grand opening, Lalli says shoppers can expect discounts of up to 50 per cent, raffle draws and other giveaways.

“We’re going to do some giveaways and raffle tickets will be put into draws. One of the hottest items is a Super Nintendo Classic. There will be free gift cards, a lot of draws and no purchase will be necessary to be entered into raffles.”

Lalli also says there will be door crashers for games.

Ultimately, Lalli-who hopes to open two more locations in 2018–says that his success can be attributed to We’ve Got Gamez’ universal appeal.

“Our catchphrase is “We’ve Got Gamez is a place for any gamer.” If you’re 50, we can make you feel eight-years-old again. We find the hard to find items. I deal with people in the U.K., Japan and the U.S. We make every effort to try to find what people are looking for. People want to get their childhood games back.”