While new housing developments always get a lot of attention, some are more controversial than others.

Interestingly enough, a new development may be coming to Mississauga—and this time it might not be a high-rise.

The new proposed development calls for 144 back-to-back stacked town homes on the north side of the QEW and west side of Camilla, fronting North Service Road. Currently there is a gas station located just on the corner of the lands. A place of religious worship is also nearby. 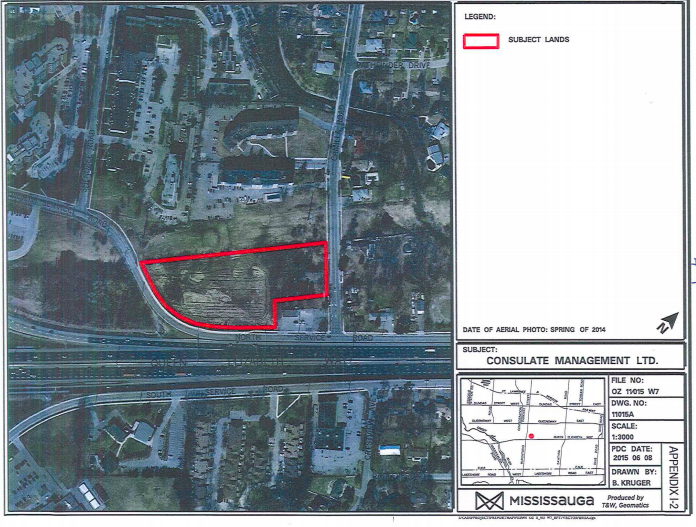 The site is located within what’s called the “Downtown Hospital Character” area, an area that currently only allows apartment buildings to be developed. The applicant is proposing a shift to allow horizontal multiple dwellings (including stacked back-to-back townhomes) to be built in the apartment-only area—a shift that will change the look and feel of the area. 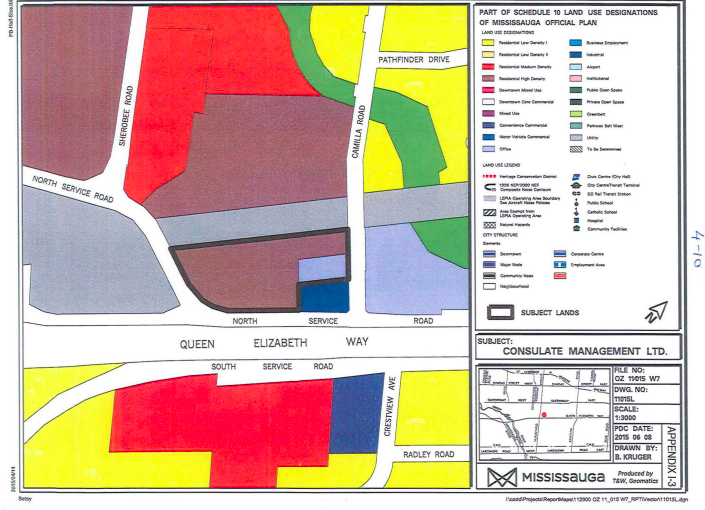 This development has been controversial for a number of reasons.

One point of contention revolves around the fact that the lands themselves are located on the fringe of the Cooksville Creek. This means that the buildings themselves must adhere to the policies set by the Credit Valley Conservation (CVC) in regards to flooding. The buildings must be flood proofed to regulatory flood levels and emergency access must be provided. Also, pedestrian movement must not be hindered during flooding.

“We did some mapping of the Cooksville Creek and we found out the distinction between the floodplain and the flood fringe. These lands are in the fringe. They don’t funnel the water rushing by, it back flows onto them. And under the policies of the CVC you have the opportunity to try and deal with that. I’m not saying you have, I’m not saying you haven’t, I’m saying that when the day comes either the CVC ticks the box or they don’t and you can or can not develop,” says Councillor Nando Iannicca.

Although local residents say it may not be as simple as seeking an easy check mark.

“The area right now, is a highly flooded area…it is one of the worst flooded areas in the entire city. If you go by there at any time, once the water arrives, it does not leave for about two weeks minimum… The area that they are going to put the road on now is almost a river running through there,” a local resident said.

A lot of developments have been proposed for these same lands over the decades. Over the past 30 years, various projects have been suggested for the site, including a truck stop and eight stand alone drive-through restaurant paths. Part of the reason that these suggestions were made is that the developments would be projects other than housing.

The initial project did not include the office space, as that was something that was purchased as time went on. It is not uncommon for owners and builders to purchase adjacent lands to increase the potential development size. Glen Broll, from Glen Schnarr and Associates Inc. mentioned that the owners looked to purchase the gas station on the corner of the lot, but were unsuccessful.

The lands are currently zoned H-O-9 (office) and H-D-6 (development). The “H” before both of the zoning designations means that the lands must be on hold until an engineer certifies that the lands adhere to flood proof requirements to the satisfaction of the city and CVC. The “6” at the end of the zoning destination for development is a special zoning number that allows the owner to only do with the land what is current on the site. The lands currently are only used as a field. The proposed application wants to move the designation to RA5-Exception to allow for the 144 back-to-back stacked townhouse on the site. 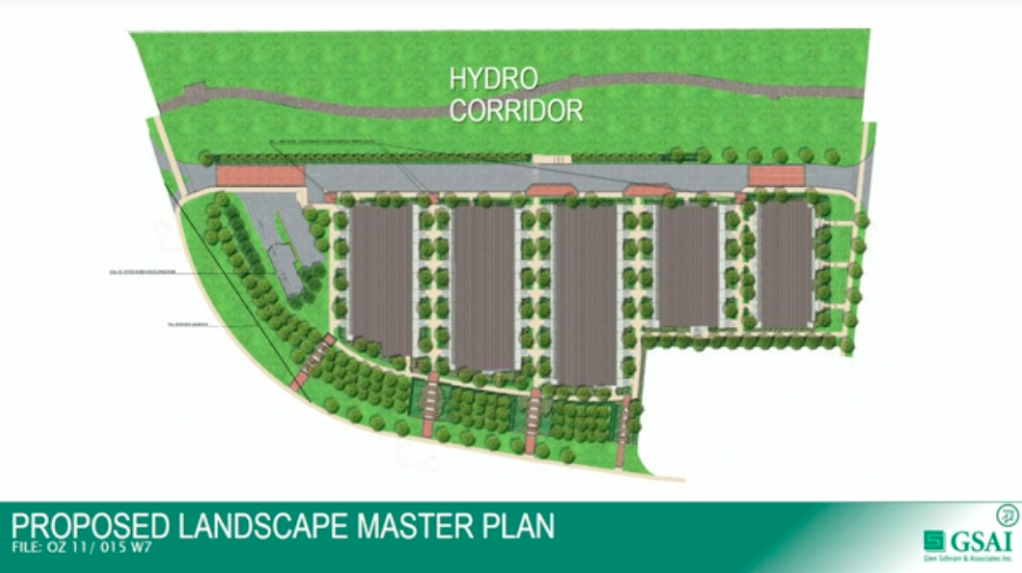 This specific application has taken some time to get through the planning and development process at city hall. Back in 2011, Glen Schnarr & Associates filed a rezoning application for the development of 20 storey apartment building along with stacked townhouse.

The initial proposed development site plan looked like the image below. s 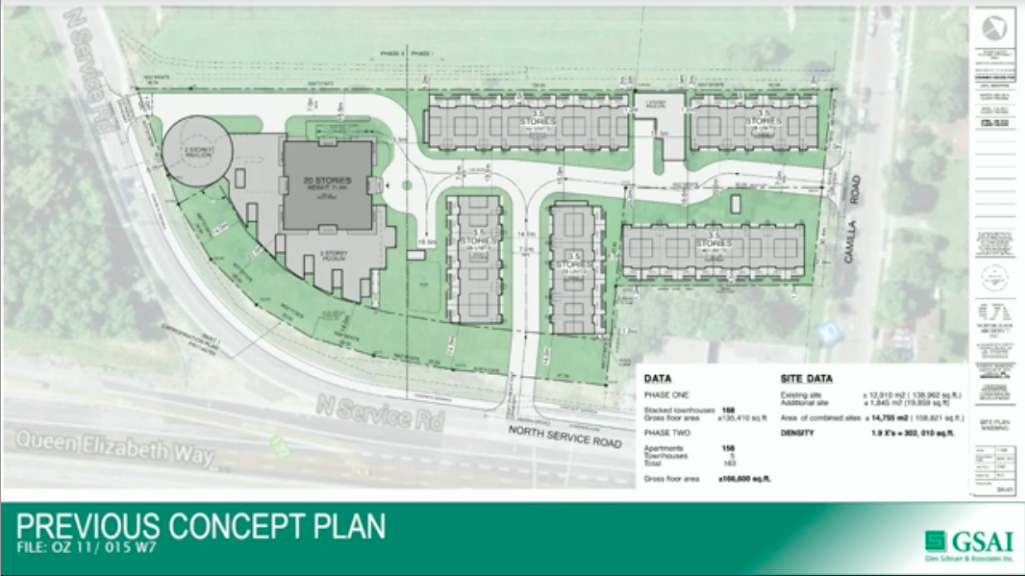 Previous concept plan for the site

In June 2015, there was a community meeting held where 45 residents were opposed to the 20 storey condominium apartment building, stacked townhouses and regular townhouses. There were concerns about flooding, the character of the area, traffic, parking and health (mainly because the development is in close proximity to Hydro One corridor and QEW).

A resident came forward on April 9 to ask about the rezoning changes being made. With the changes to RA-5, a high-rise apartment building on the site would be permitted, even if it is not included in the site plan provided.

“That’s a problem right there. If you had taken the high rise out, we as residents would not have an issue. Because you’re keeping, what appears to be a small loophole, to put a high-rise there, that’s going to be an issue.”

Broll did clarify he would be happy to have the amendment to zoning for the 144 back-to-back stacked town homes only, and if the project is not successful or changes in the future, that he would be willing to come back and seek approval for a high rise.

“The apartments are dead and gone in the approval of this application,” says Iannicca.

Iannicca mentioned that this development was definitely possible, as long as various components of it are satisfied. One problem will be managing the flooding, and the other will be the traffic control and transportation outlines.

“The reason I love this, because of what it isn’t. The site is zoned high density…a 20 or 25 story building is permitted here. I kind of prefer [the stacked townhomes]. I have a lot of support for this,” he says.