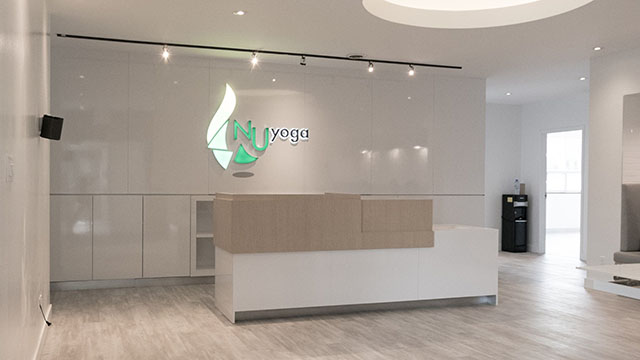 Anyone with a regular yoga practice–or even a not-so-regular one–knows that the meditative aerobic and strength-building workout is invigorating, refreshing and, unfortunately, costly.

Yoga studios, known for their serene decor and mix of heated and unheated rooms, typically offer wonderful classes at fairly premium prices (think about $20 a class or $100 or more a month for an unlimited membership).

For that reason, the team behind NU Yoga–which just opened up on North Service Road in the Dixie and QEW area–is working to bring yogis the traditional studio experience at an affordable price.

“Kanchan Karunaker, who owns the studio, noticed that yoga isn’t very affordable, so she decided to come in and create an affordable yoga studio,” says Shirley Zhou, an instructor at NU Yoga.

Zhou added that Karunaker started practicing yoga on a doctor’s recommendation after sustaining an injury.

Her [class] package was $40 for 30 days, but when it was time to renew, she realized how expensive a yoga practice is,” says Zhou, adding that $120 a month isn’t affordable for everyone.

The newly renovated 4,300 square foot studio, which boasts a chic and atmospheric interior, offers unlimited classes for $59 a month for four months (with a $30 one-time enrollment fee)–well below the $100 average that yogis can expect to pay at other studios.

Other price packages include a $20 pass that allows students to attend unlimited classes for 20 consecutive days (meaning you could be spending as little as a $1 a class if you do one class a day), an $89 monthly pass and a $20 “all you can yoga for the day” pass.

“If you sign up for monthly auto-renew, you can get $49 a month for a lifetime,” she says.

NU Yoga offers both heated and unheated rooms and hatha, vinyasa, flow, core, power, yin and restorative styles of yoga. There are classes geared towards more specific skill sets (such as hatha levels 1 and 2) and even a fitness-oriented class called NU yoga GYM. The gym-style class works to bridge the gap between yoga and fitness through “dynamic contraction based movement and high intensity intervals.”

In terms of amenities, the studio offers changerooms, showers, rental mats, towels, lockers and some toiletries. The studio also boasts all new equipment, including straps, blocks and blankets.

“We’re starting to get more interest,” Zhou says. “ We offer premium space and teachers at an affordable price.”