Brampton’s Most Wanted: The Plaid Bandit 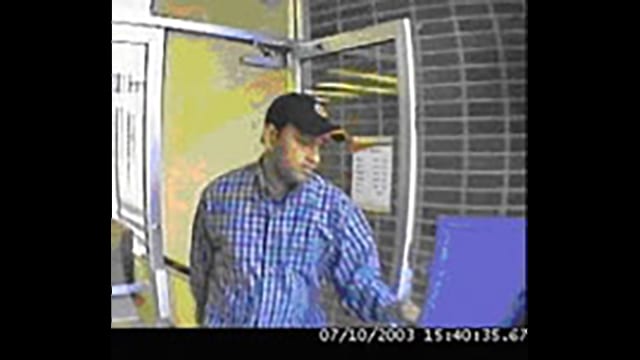 Although most offenders in Brampton are caught, some wanted people manage to slip under the radar and elude arrest.

Although most offenders in Brampton are caught, some wanted people manage to slip under the radar and elude arrest. For that reason, Peel police keep a list of fugitives that are still wanted months—and sometimes years—after committing crimes in the city.

According to Peel police, officers are still on the lookout for a man known as The Plaid Bandit.

The alleged bandit is a suspect in two bank robberies that occurred in Brampton. According to police, the suspect was implicated in a robbery at a Scotia Bank on Mountainash Drive on July 7, 2003 and another incident at a CIBC on Bramalea on July 10 of the same year.

According to police, the suspect approached the tellers with hold up notes.

Police also say the suspect is also connected with a bank robbery in Mississauga. According to police, on July 3, 2003 at approximately 12:40 p.m., the suspect attempted to rob a Bank of Montreal in the Dixie Outlet Mall on South Service Road. Police say the suspect approached the teller and passed a note indicating it was a robbery and that he was armed. In this instance, the suspect fled without any money.

Police say that the suspect, who has been wanted ever since, is described as a South Asian male who is 6’1”-6’2” with a medium build. He was last seen wearing a baseball cap, a long-sleeved plaid shirt (his signature top), black jeans and black shoes. He was spotted fleeing the scene in a black four-door vehicle similar to a Toyota Corolla.

There were no injuries sustained during any of the incident, and no weapons were seen.
Anyone with information is requested to contact Peel Regional Police Central Robbery Bureau at 905-453-3311 ext 3410, or Peel Crime Stoppers at 1-800-222-TIPS/8477.