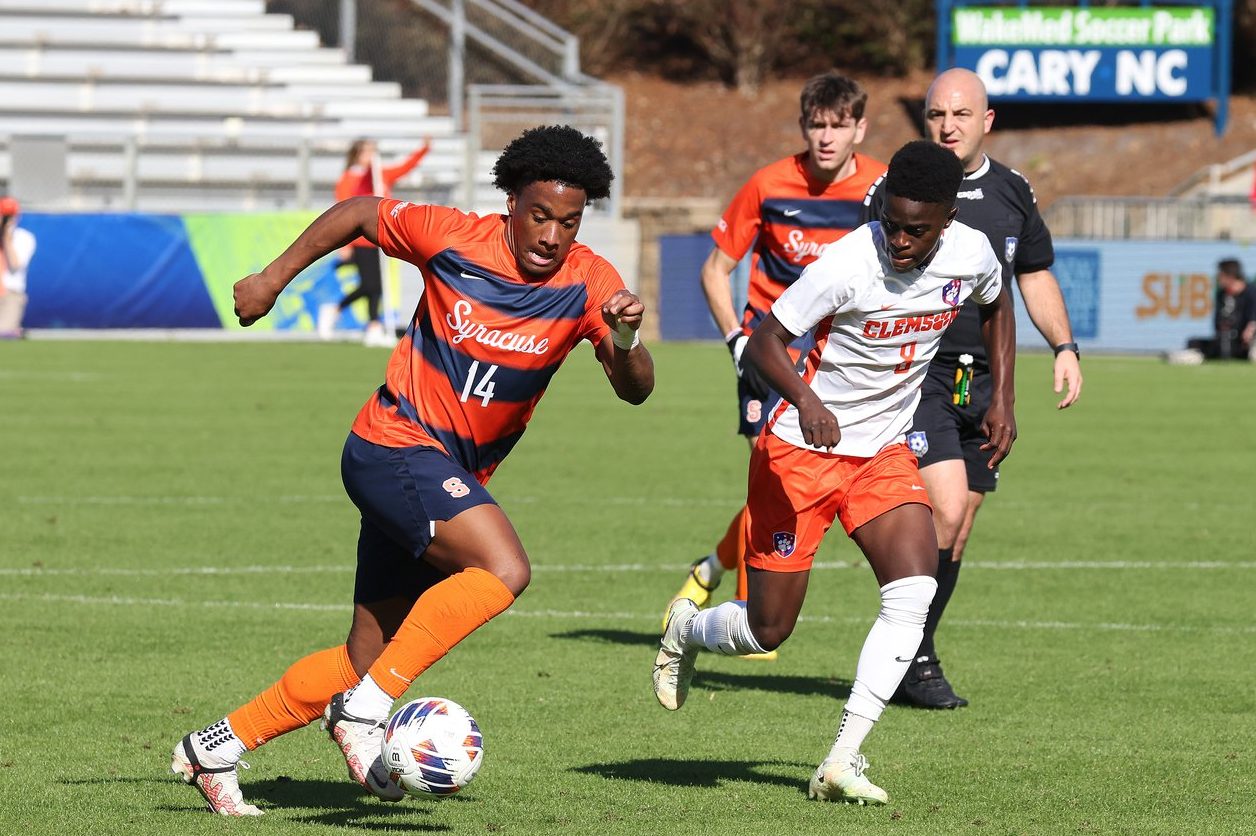 Canadian forward Levonte Johnson (left) is shown in action for Syracuse University in a 2-0 win over Clemson on Nov. 13, 2022, in the ACC Tournament championship game in Cary, N.C. THE CANADIAN PRESS/HO-Syracuse Athletic Communications

Brampton footballer Levonte Johnson has won wherever he’s gone, and could extend that winning streak to one of the NCAA’s most prestigious awards.

Johnson transferred to Salt Lake Community College in 2020 and led the Bruins to their first NJCAA title, and capped off a stellar 2022 when the Vancouver Whitecaps selected him in the first round (29th overall) of the Dec. 21 MLS SuperDraft.

Now, Johnson can add to his blue-chip resume when the winner of the MAC Hermann Trophy is announced at the Missouri Athletic Club in St. Louis. on Friday (Jan. 6). The award is the top individual honour in NCAA Division I soccer.

Johnson is up against Creighton forward Duncan McGuire and Duke midfielder Peter Stroud.

Johnson earned All-Atlantic Coast Conference first-team honours in scoring 11 goals for Syracuse this season, eight of which were game-winners to lead the NCAA. He also contributed six assists, finishing second in the ACC in points and goals.

Johnson’s 86th-minute goal gave Syracuse a 3-2 win over Creighton and sent the Orange to the NCAA final. He was also on target in the championship game in Cary, N.C., converting his spot kick as Syracuse defeated Indiana 7-6 in a penalty shootout after the match finished knotted at 2-2.

“He was terrific for us,” said Syracuse coach Ian McIntyre. “He led the line, developed a terrific partnership with Nathan Opoku up front and between the two of them were a real headache (for opponents).

“What (Johnson) brought was a power and directness. And he scored big goals in big moments for us … We had a good group but he provided us that killing edge.”

Johnson scored 40 goals and added 32 assists in 87 games over his collegiate career.

Johnson, who is Syracuse’s second MAC Hermann Trophy finalist after former Toronto FC goalkeeper Alex Bono in 2014, is up against elite competition.

McGuire led Division I in goals (23) and points (50), setting the Creighton single-season record for goals in the process.

Stroud is the first Duke finalist for the MAC Hermann since 2011 winner Andrew Wenger, who went first overall in the MLS SuperDraft that year to Montreal. Stroud is also the first player in ACC history to win back-to-back ACC Midfield of the Year honours.

Johnson was the fourth Canadian taken in the first round of the MLS SuperDraft.

This report by The Canadian Press was first published Jan. 5, 2023.