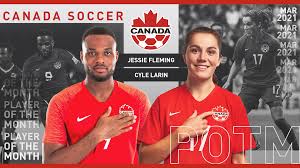 Cyle Larin, of Brampton, was named Canada’s male soccer player of the month for March.

It’s the second time in the last three months that the 25-year-old has been recognized for his efforts on the soccer field.

Larin continues to find the back of the net, scoring four times in Canada’s World Cup qualifying wins over the Cayman Islands and Bermuda.

His four goals moved him into fourth place on Canada’s all-time list for goals in FIFA World Cup qualifiers. He’s now just one goal back of Dwayne De Rosario and Dale Michell and three back of all-time leader Alex Bunbury.

The Brampton native was dominant in Canada’s 5-1 trouncing of Bermuda, scoring three times.

It marks just the third time a Canadian has recorded a hat trick in World Cup qualifying play. Simeon Jackson, in 2011, and Bunbury, in 1992, were the others.

Larin also scored in Canada’s 11-0 romp of the Cayman Islands.

His hot play at the club level has helped Besiktas hold on to top spot in the Turkish Super Lig. In four league matches, the Canadian scored a goal and added an assist.

His extra time marker also helped Besiktas advance to the final of the Turkish Cup for the first time since 2011.

Jessie Fleming was named Canada’s female player of the month for March.

Three Brampton artists among those nominated for 2022 Grammy Awards