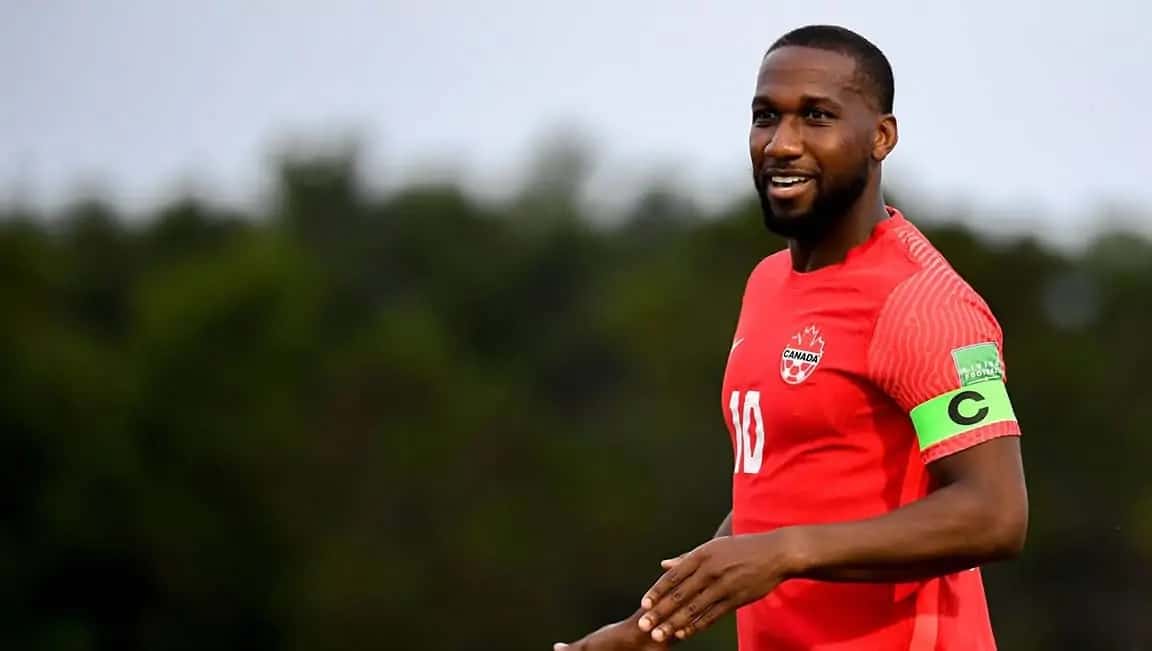 Brampton native Junior Hoilett drew the foul that set up Canada's tying goal on a penalty in Toronto on Thursday. Canada drew 1-1 with Honduras. (file photo)

Canada had to work hard for a 1-1 tie with Honduras on Thursday in the opening game of the final round of CONCACAF World Cup qualifying.

The game at BMO Field in Toronto — fast-paced and often prickly with little room to breathe — was the first of 14 for Canada in the final qualifying round in the region. And it was an instant reality check, with two valuable home points dropped.

The teams each scored from the penalty spot with Honduras going ahead 1-0 in the 40th minute from Alexander Lopez with Brampton native Cyle Larin pulling the Canadian men even in the 66th. Fellow Brampton native Junior Hoilett drew the penalty.

Canada, ranked 59th in the world, came into the game on a wave of optimism. But No. 63 Honduras, looking calm and collected some 3,400 kilometres away from home, proved to be a stubborn opponent.

Canada had more of the ball but could not unlock the Honduran defence until Larin converted his penalty for his 19th Canadian goal.

Veteran defender Maynor Figueroa took down Hoilett after Canadian goalkeeper Milan Borjan triggered a rapid-fire attack following a save at the other end. Richie Laryea did most of the work with the ball before the Honduran defence was compromised.

Lopez opened the scoring after Canadian wingback Tajon Buchanan, a Brampton native, took down Andy Najar in the box. A nice give-and-go between Kervin Arriaga and Najar allowed for the Honduran penetration with Buchanan’s leg catching Najar as the D.C. United wingback headed towards goal.

Mexican referee Fernando Guerrero Ramirez pointed to the spot and Lopez slotted the ball into the corner.

Lopez appeared to injure himself on the penalty, grimacing and holding the back of his thigh as his teammates celebrated. He was taken off the field on a stretcher, giving way to CF Montreal forward Romell Quioto.

Canada pressed in the second half with Honduras doing its best to kill time and slow down play. The visitors still had some teeth, however. Borjan got a fingertip to a Brayan Moya header in the 74th minute, pushing the ball off the post to safety.

Jonathan David had an opening in the 80th minute after Steven Vitoria headed the ball to him on a free kick but the Canadian forward’s shot was blocked. Laryea then shot high from a tight angle in the 89th minute.

The Canadians now head south to take on the U.S. in Nashville on Sunday. Then it’s back to Toronto to host El Salvador next Wednesday.

Next month, the Canadians visit Mexico and Jamaica before returning to BMO Field to entertain Panama on Oct. 13. Canada will play eight more matches after that, wrapping up play in March,

Canada Soccer has not announced the remaining four domestic venues after the October matches.

The top three in the final CONCACAF round-robin qualify for Qatar 2022 with the fourth-place finisher taking part in an intercontinental playoff to see who joins them. Honduras made that playoff last time around, losing 3-1 on aggregate to Australia.

The Canadian men’s lone trip to the World Cup was in 1986. This is their first trip to the final round of qualifying in the region, which covers North and Central America and the Caribbean, since the lead-up to France ’98.

Thursday’s game was the first for the Canadian men on home soil since Oct. 15, 2019, when they scored a landmark 2-0 win over the U.S. in CONCACAF Nations League play at BMO Field. The Canadians played their next 15 matches on the road due to pandemic-related travel restrictions, going 11-4-0 with the only losses to Iceland, Mexico and the U.S. (twice).

Attendance for Thursday’s match was capped at just under 15,000 due to COVID regulations. The announced crowd of 14,822 was enthusiastic and noisy with a chant of “Canada, Canada” in the first minute of play. “Super Canucks” read one large sign in the south stand.

The Canadian starting 11 came into the game with a combined 294 caps. Six of the starters had less than 20 senior appearances

Herdman said prior to the match it might take his team a little while to find its rhythm given the layoff since the Gold Cup. But it was a frenetic opening with neither team given much time on the ball.

Davies wasted little time showing his pace and guile, beating defenders down the left flank in the 11th and 13th minute but unable to find a teammate in the box as Honduran defenders scrambled. Buchanan showed off his bag of tricks, nutmegging a Honduran in his own half.

Honduras was unfazed, looking to counter-attack and shoot from any distance. Borjan made a diving save in the 20th off Diego Rodriguez after punching away a Honduran free kick.

Davies and Buchanan changed sides midway through the half. At times, Canada had a line of five attackers waiting for the ball as attacks developed.
Down 1-0 Canada came close in the 45th minute. But Honduran ‘keeper Luis Lopez made a fine save to deny David after Laryea carved open the visitors’ defence.

Canada had 58 per cent of the possession in the first half but was unable to turn that into goals.

Herdman brought on Hoilett at the half, replacing Buchanan.

A call for a Honduran handball went unanswered in the 58th minute. The CONCACAF final round does not feature video review with the confederation saying the technology was not available in the stadiums of five of the eight competing federations.

With the CONCACAF road map changing several times as the pandemic played havoc with the world soccer schedule, the Canadians — along with El Salvador (No. 64) and Panama (No. 74) — fought their way through a 29-team first round and then a knockout second round to earn the right to join Mexico (No. 9), the U.S. (No. 10), Costa Rica (No. 44), Jamaica (No. 50) and Honduras in the so-called Octagonal.

Canada defeated Bermuda, the Cayman Islands, Aruba, Suriname and Haiti (twice) to get this far.

Honduras is responsible for one of Canada’s darkest days on the soccer field, having ended one Canadian World Cup qualifying run in an 8-1 humiliation in San Pedro Sula in October 2012. Hutchinson is the lone Canadian starter from that game still wearing the Maple Leaf.