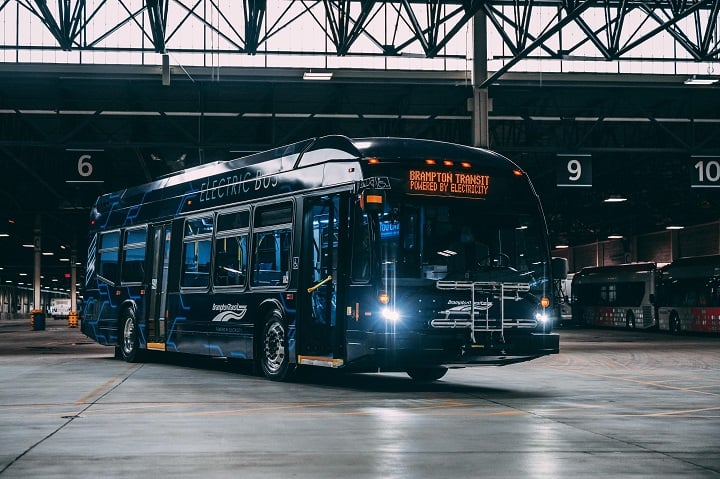 Brampton Transit is getting its first glimpse into the future of electric vehicles.

This week, the city welcomed its first electric Nova Bus to Brampton Transit’s Sandalwood Facility — the first of eight  electric buses (or eBuses) that will be on Brampton’s roads in Spring 2021.

The eBuses are battery-powered by electricity, with electric motors, no transmission, and zero tailpipe emissions. Each bus takes just three to seven minutes to charge fully, according to the city.

“Over the next few months, the second Nova Bus and six buses from New Flyer will arrive at Brampton Transit’s Sandalwood Facility for the largest single global deployment of standardized and fully interoperable battery electric buses and high-powered overhead on-route charging systems — three by ABB Inc. and one by Siemens Canada Limited,” the city says.

They’ll be launched on two existing routes in Brampton: Routes 23 Sandalwood and 26 Mount Pleasant. The four high-powered, on-route charging stations will be located at the Mount Pleasant Village terminal, the Queen Street/Highway 50 Züm station, and the Sandalwood Transit Facility, allowing the buses to charge during these stops.

Mayor Patrick Brown called it a very exciting development, saying Brampton will be the first city in Canada to run these new buses.

“Brampton wants to to be a green city,” said Brown, who called the new vehicles “the way of the future” in a recent interview.

“This is an example where Brampton and Canada and are being leaders on the environment, showing that we’re a city and a country that understands our green obligations.”

“This is the first step in electrifying our fleet and for the duration of the pilot project, all eight electric buses and four chargers will be identified with a new branding design,” said Milojevic.