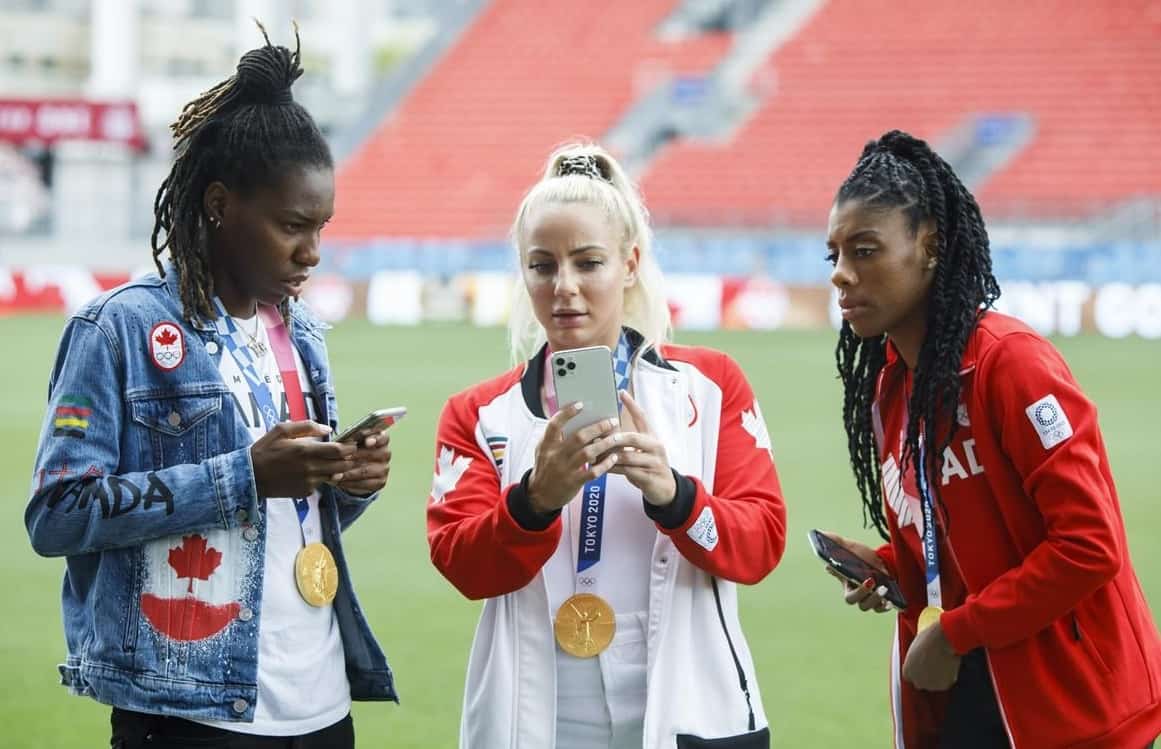 Brampton’s Kadeisha Buchanan and Caledon’s Ashley Lawrence believe their team’s Olympic women’s soccer gold medal will inspire future generations of young girls to play the game, perhaps even with the prospect of playing professionally at home.

Buchanan, Lawrence and tammate Adriana Leon were at Toronto’s BMO Field on Tuesday to show off the gold medals they won at the Tokyo Olympics after Canada bested Sweden in the women’s soccer final.

Buchanan (left in photo) echoed teammates Christine Sinclair and Stephanie Labbé when it comes to translating that success into a professional team at home. She said she hopes “something big” will come soon for women’s soccer in Canada, given the growing number of people watching women on the field. The national audience for the final peaked at 4.4 million, even though the game started at 8 a.m. ET.

“The momentum for women’s soccer is building and I think it’s at its peak so hopefully with all that goodness that we can push forward and hopefully have a women’s team in Canada,” Buchanan said. “That’s the goal.

“I would love to play at home. Doesn’t matter (if it’s) in Toronto, Vancouver, anywhere. Just to be (on) home soil and to have friends and family come to see me play. That would be very great.”

Canada does not have a professional women’s soccer league, or a team in the U.S.-based National Women’s Soccer League.

“The gold medal was perfect because that’s what we needed in inciting action to get past what COVID did to us in the pandemic and to now create a resurgence for investors to realize the return on investment that they can get out of women’s soccer,” he said.

The Canadians stated going into the Tokyo Olympics that their goal was to change the colour of their medal after they earned bronze at both the 2012 and 2016 Games.

Leon said that after being injured in March and having surgery on her foot, she was pushing through rehab the last few months to be ready for Tokyo. She said winning Olympic gold after all that hard work meant the world to her.

“It’s such an honour to bring this (medal) back home to Canada. It was just such an amazing experience to be in Japan for the last couple months and we created memories that we’ll never forget. This medal’s incredible so it’s going to have to go somewhere very safe.”

Reflecting back on how far she has come, Buchanan said she believes the medal means “dream big” and to never give up on goals.

“To be on that podium and to hear that anthem at the end, all the emotion just came to me so it means everything and you just got to find a way to keep pushing,” she said, noting she would be wearing her medal out as much as she can.

Lawrence (right in photo) said watching the women’s team play at the 2012 Olympics in England made her want to play for Canada. Fast forward nine years and she has won gold as a player for the same team.

“Being able to get this gold medal, it just makes me think of my family, friends, all Canadians that were watching, that were tuning in, but especially the next generation,” she said. “The young people that were looking up to us, (we’re) just hoping to inspire them like we were inspired when we were young. I hope that it’s that catalyst effect.”

Lawrence and Buchanan grew up together in Peel Region, and said that being on the field side by side while playing for Canada and winning gold was something they both cherished.

“I just remember there were so many games where towards the end, whether we were down, we would just kind of give each other that look and we knew it’s time to turn it on,” said Lawrence.

“And then the next game, she’s pushing me to set up a goal or score a goal so I just think that from early on, we’ve held each other to such a high standard.”

Buchanan said it felt “unreal” to be on the podium with Lawrence.

“I remember talking to (Lawrence), ‘This is our time to win for each other, and let’s just push each other to be the best that we can be for ourselves and for the team and grind out that win, each and every game.'”

A celebration tour for the team is expected to be announced in the coming weeks. No dates or locations have been set.