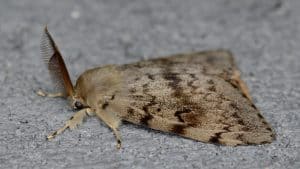 The city is working to reduce the number of invasive Spongy Moths in Brampton and is asking residents to help get involved during Parks Cleanup Days.

Spongy Moths have been present in Brampton for more than a decade, but the city says their numbers have reached higher than normal levels in the last three years.

The insects hatch from late April to mid-May and their caterpillar larvae feed on the crown foliage of a wide range of trees, making them a defoliating pest.

To help control the Spongy Moth population in Brampton and protecting vulnerable trees, the city will be conducting ground base spraying of trees along specific streets and in parks next month using a naturally occurring bacteria found in soil harmful only to the insect.

Then in July, the city will install 200 pheromone traps in Brampton woodlots. These green cardboard traps are shaped like small milk cartons and contain a paper strip coated with the Spongy Moth pheromone.

The pheromone is not toxic to humans, other mammals, birds, fish or insects, and the traps will be collected in August.

Free Spongy Moth kits are available at Parks Cleanup Days in May.

You can stay informed and learn more about controlling the Spongy Moth population by visiting Brampton.ca