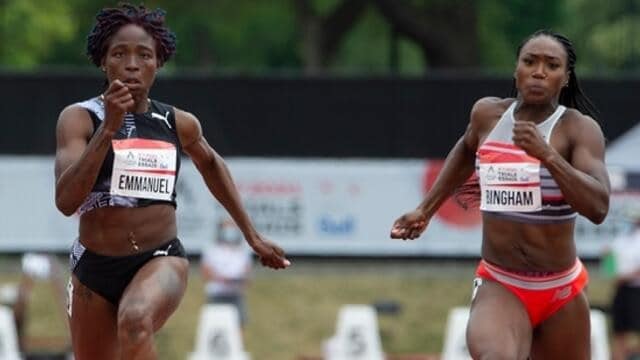 Brampton sprinter Khamica Bingham is on the bubble to advance to women’s 100-metre semifinal at the 2020 Tokyo Olympics.

The 28-year-old Bingham, who is a second-time Olympian, was fourth in her heat with a time of 11.21 seconds. The top three in each heat automatically advance to the semifinals, with the next-fastest runners also advancing. Bingham was one-20th off a second off the top three, finishing behind Jamaica’s Elaine Thompson-Herah (10.82), Switzerland’s Mujinga Kambundji (10.95) and Germany’s Tatjana Pinto (11.16).

Bingham made her Olympic debut in Rio de Janeiro in 2016, overcoming a knee injury to run the anchor leg for a 4×100-metre relay team that finished sixth in the final.

Crystal Emmanuel, a Scarborough native, clocked 11.18 to finish third in her heat and move on to the next round.

Five other Brampton sprinters are on Canada’s 57-competitor athletics team.

Photo by The Canadian Press