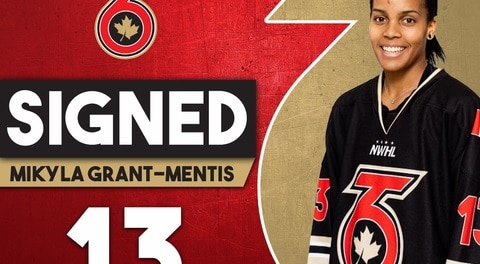 The MVP of the National Women’s Hockey League, Brampton’s Mikyla Grant-Mentis, has re-signed with the Toronto Six.

Grant-Mentis, 22, tied for the NWHL regular-season lead in points with five goals and four assists in six games in Lake Placid, N.Y.

The five-foot-eight forward had a goal and an assist for the Six in a 6-2 Isobel Cup semifinal loss to eventual champion Boston Pride in Brighton, Mass.

“It was important for me to re-sign because first, we didn’t win the cup, which is definitely something we want to do next year, and we never really got to play at home,” Grant-Mentis said in a statement from the Six.

“I’m just looking forward to playing at home, getting the Toronto fans and everyone behind us and then going for that Isobel Cup that we missed out on last year.”

After concluding her four-year college career at Merrimack, Grant-Mentis played two games for the NWHL’s Buffalo Beauts at the end of the 2019-20 season and had two goals and an assist.

She then signed with the expansion Six.

“Mikyla Grant-Mentis is our secret weapon,” Six president Digit Murphy said. “Regardless of playing her on the wing or in the middle, she is an offensive threat, she anticipates well and is a constant threat to opponents.

“She has a special talent that you can’t teach.”

Grant-Mentis was the first Black player to be named league MVP in the NWHL’s six-year history.

She also earned the NWHL’s award for newcomer of the year.

She was one of six players to earn the league’s Foundation Award for applying core values of hockey to her community and growing and improving hockey culture.