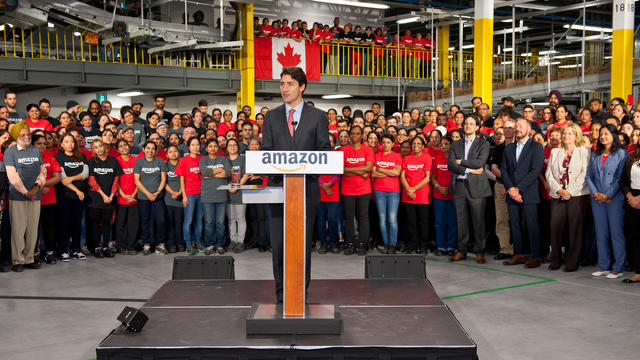 It’s official – Brampton will submit a regional bid with five other municipalities in the Toronto Region for Amazon’s new North American headquarters.

It’s official – Brampton will submit a regional bid with five other municipalities in the Toronto Region for Amazon’s new North American headquarters.

Just last week, Amazon announced that they would invest over $5 billion in construction and operation of “Amazon HQ2” and create 50,000 new jobs for the city in which they chose to set up shop. We reported that Brampton might have a chance at being home to the new facility.

Now, Brampton has entered a joint bid alongside Toronto, Mississauga, Durham Region, York Region, and Halton Region to win the title of home to HQ2. The news was announced on September 13, just days after Amazon announced its intention to expand.

According to a statement from Toronto Global, the cities and regions “have collectively agreed that the best way to compete is to submit a regional bid.”

This is big news for Brampton – we’re a growing Canadian municipality, we’re in the heart of the Innovation Corridor and we may be able to support the new facility. We already have two Amazon fulfillment centres, after all.

“The Toronto Region is ready for Amazon,” said a statement from the Mayors and Chairs of the cities and regions – Brampton Mayor Linda Jeffrey included.

“The company already has a strong presence in the area, with more than two-million square feet of operational footprint across the Toronto Region. With ready access to major markets, a compelling cost structure, and sophisticated U.S. and international connectivity, there has never been a better time for Amazon to choose the Toronto Region.”

Mayor Linda Jeffrey took to Twitter to express that Brampton is “taking this opportunity very seriously.”

We are engaged in intense conversations with Toronto Global, our GTA partners and other levels of government. #HQ2 1/ https://t.co/ZGD0KkL7xU

Make no mistake, Brampton is taking this opportunity very seriously 2/

It is our view that only the Toronto Region will be able to meet Amazon’s particular and extensive requirements. #HQ2 3/

& already being home to 2 Amazon fulfillment centres, Brampton is emerging as an attractive player on the Innovation Super Corridor #HQ2 6/6

We do have a lot going for us in Brampton, and almost every day the City reminds us that that Brampton is “future-ready” or at the very least, preparing for the future.

On the other hand, it’s already quite crowded in Brampton. We are the second fastest growing city in Canada, with about 14,000 new residents per year, according to Brampton’s latest economic review.

The bid will demonstrate the scale, diversity, talent, creativity and dynamic opportunities in the Toronto Region – referring to the six municipalities entering the bid.

“As the commercial centre of the country, this is the Toronto Region’s opportunity to showcase our attractive regional building sites, highlight our expansive and rapidly growing technology ecosystem, and introduce the depth and breadth of our global talent pool,” explained the statement.

“We also look forward to highlighting our unmatched cultural diversity to Amazon executives and frankly, to be a little un-Canadian and show off our amazing quality of life. These are the key attributes Amazon is looking for and we will have an attractive story and creative proposal to share.”

The Toronto Region is clearly making a passionate bid for the new headquarters, which will be a “full equal” to Amazon’s first headquarters in Seattle, meaning that it won’t be a satellite office, but a fully fledged headquarters set to bring in billions of dollars and tens of thousands of jobs, according to Jeff Bezos, Amazon founder and CEO.

“The Toronto Region is the economic engine of Canada, generating 20 percent of the country’s GDP and housing 40 percent of Canada’s business headquarters,” said Toronto Global. “The region is a major player on the international stage, attracting business investment from all over the world. There has never been a better time to come together to build on this momentum and to bolster the region’s stellar global reputation as a safe, stable and profitable place to invest.”

What do you think of HQ2 setting up shop in Brampton?