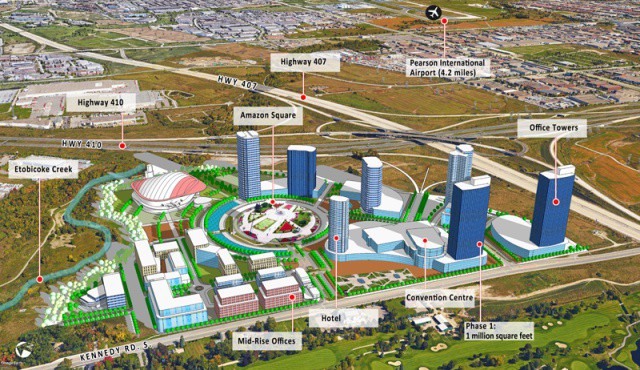 We’ve known since September 2017 that Brampton submitted a regional bid with five other municipalities in the Toronto Region for Amazon’s new North American headquarters.


We’ve known since September 2017 that Brampton submitted a regional bid with five other municipalities in the Toronto Region for Amazon’s new North American headquarters. The City has indeed chosen a massive possible site for the headquarters right here in Brampton.

Back in September, Amazon announced that they would invest over $5 billion in construction and operation of “Amazon HQ2” and create 50,000 new jobs for the city in which they chose to set up shop. We reported that Brampton had entered a joint bid alongside Toronto, Mississauga, Durham Region, York Region, and Halton Region to win the title of home to HQ2.

And in October, the City officially proposed a site for the headquarters. It seems Brampton is ahead of the game and truly vying for the win. The City’s proposed location is the 112-acre plot of lane at Highway 410 and Highway 407, at 7575 Kennedy Road South, four miles from Pearson Airport.

The plot is “fully-serviced, shovel-ready land strategically located,” said the City in a statement.

This is big news for Brampton — we’re a growing Canadian municipality, we’re in the heart of the Innovation Corridor and we may be able to support the new facility. We already have two Amazon fulfillment centres, after all.

“One year ago, we celebrated the opening of Amazon’s fulfillment centre in Brampton –- the largest in Canada,” said Mayor Linda Jeffrey. “Our youth, diversity and quality of life continue to make Brampton a great place for business to invest. And the City has invested too, committing up to $150 million to a new STEM-focused university and innovation hub in Brampton, in partnership with two of Canada’s leading post-secondary institutions, Ryerson University and Sheridan College. The future is bright for Brampton.”

We do have a lot going for us in Brampton, and almost every day the City reminds us that that Brampton is “future-ready” or at the very least, preparing for the future.

On the other hand, it’s already quite crowded in Brampton. We are the second fastest growing city in Canada, with about 14,000 new residents per year, according to Brampton’s latest economic review.

Here are some of the reasons why the City has proposed Brampton — and the junction of the 410 and the 407 in particular — as the site of HQ2:

“While the site is partially occupied by a sports arena and associated parking, it can be easily transformed to accommodate Amazon’s short term and long term development requirements,” says the City.

Not only have this logistical features been highlighted, some natural and cultural features are also part of Brampton’s passionate bid, such as the Etobicoke Creek running through the site with recreation options like a pathway for biking and walking. Further, north of the site is the Brampton Golf Club, “providing the potential for additional expansion.”

This is all well and good, but you might have noticed something interesting about the site.

“The site includes an existing 157,000 square foot building, ready to use, re-purpose or remove,” says the City on the plot’s GeoHub Story Map – a feature that offers a visually-pleasing, interactive way to learn about the bid.

That’s right, the site is also home to the Powerade Centre.

So, what does the City plan to do with the event and recreation space, and the home of the Brampton Beast? The short answer is we won’t know until Amazon either selects or does not select Brampton as its home for HQ2.

The long answer is that “There are no plans to remove the Powerade Centre,” according to the City’s FAQ on this plan. “Amazon’s [Request for Proposals] for its headquarters indicated an interest in existing buildings in any site proposed. If Amazon was to select the Brampton site, it would decide on what to do with the facility.”

It’s important to note that there are several key factors to consider here.

“We expect HQ2 to be a full equal to our Seattle headquarters,” said Jeff Bezos, Amazon founder and CEO in a statement. “Amazon HQ2 will bring billions of dollars in up-front and ongoing investments, and tens of thousands of high-paying jobs. We’re excited to find a second home.”

“Full equal” is no joke – HQ1 in Seattle is massive. Amazon’s first headquarters boasts 33 buildings, takes up 8.1 million square feet, houses 24 restaurants and cafes, employs over 40,000 people, and has created 53,000 additional jobs across Seattle as a result of their investments, that is, jobs that aren’t even at HQ1 itself.

Amazon has received a total of 238 proposals for HQ2 from cities and regions across 54 states, regions, and territories across North America.

What do you think about HQ2 setting up shop in Brampton?

Rendering courtesy of the City of Brampton