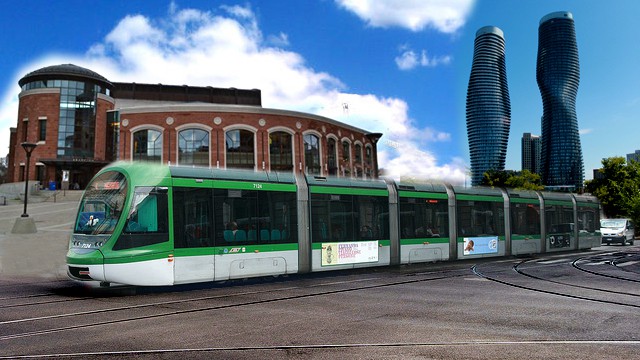 Good news for everyone who was worried about Brampton’s reticence to move forward on the incoming provincially funded LRT: it looks like the city is coming around.

City officials are expected to sign off on an agreement outlining planned construction of an LRT line connecting Brampton and Mississauga, The Brampton Guardian reports.

The upcoming meeting, scheduled for Wednesday, is set to include a report and recommendation outlining a Memorandum of Understanding (MOU) between Brampton, Mississauga and Metrolinx regarding the much-discussed Hurontario-Main LRT.

According to the Guardian, Brampton is still fretting over the last few clicks of LRT. That said, the approved route up to the Gateway Terminal at Steeles appears to be a go.

As some of you might recall, Brampton caused quite a stir when it turned down the province’s offer of $400 million to cover its portion of the transit project.

The decision, though puzzling, came as no surprise. Several members of council had been opposed for months, citing concerns about hurting the look of the downtown core, needing the line elsewhere and too little funding. While the vote came across to many as a risky gamble with no guarantee of a satisfying pay off, it looks like the city is becoming a little more accommodating as construction approaches.

The article breaks down some pertinent details of the MOU, which states that Metrolinx is responsible for “all costs to acquire property for the project” and that Brampton will provide legal and other support. The MOU also stipulates that Metrolinx will reimburse the city for costs incurred after April 15, 2015.

It looks like things are getting on track (no pun intended). It’ll be interesting to see how Wednesday’s meeting goes.