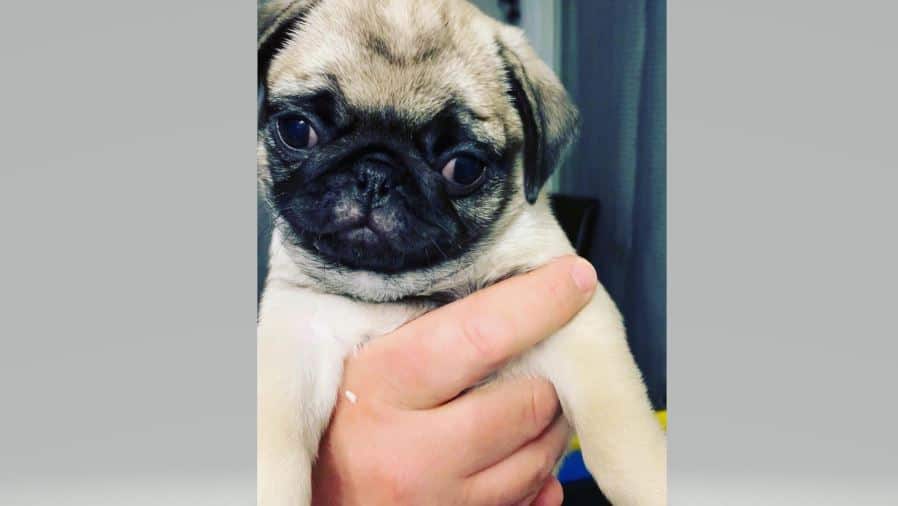 Police are searching for a suspect and this stolen pug puppy after a theft in New Tecumseth on March 22, 2022 (Photo courtesy Nottawasaga OPP)

A Brampton man has been charged but a second suspect is still on the loose with a stolen puppy after a brazen theft north of Vaughan this week.

Around 5:00 p.m. on Tuesday (March 22), police were called to a residence in the area of Treetops Blvd in New Tecumseth, approximately 60 kilometres northwest of Vaughan.

Police said a family at the home had a pug puppy for sale and arranged for two men to come view the dog who said they were interested in buying the pooch.

But instead of a puppy purchase, police alleged the men snatched the dog and took off running without paying for the pilfered pup.

A 24-year-old man from Brampton was located and arrested a short while later, but officers say a second man and the stolen dog have not been found.

The second suspect is described as a male of South Asian descent and was wearing all black clothing at the time of the theft.

Police have not released the name of the arrested Brampton man. He was charged with Theft under $5000 and Breach of recognizance and is scheduled to appear in court in Bradford on April 28.

Investigators are hopeful someone may have dashcam or home security footage from the area around the time of the incident, and police are asking anyone with information on the stolen puppy or the suspects to contact the Nottawasaga OPP at 1-888-310-1122.

You can also submit a tip anonymously through Crime Stoppers at 1-800-222-TIPS (8477) or ontariocrimestoppers.ca. Tipsters will never have to testify and may be eligible to receive a cash reward of up to $2,000.

Police are also reminding the public that the Nottawasaga OPP and many other police detachments have set up safe trading zones.

The spaces offer a safe location to make online or for-sale transactions with people that you don’t know.