Brampton Has an Incredible History of Women in Hockey 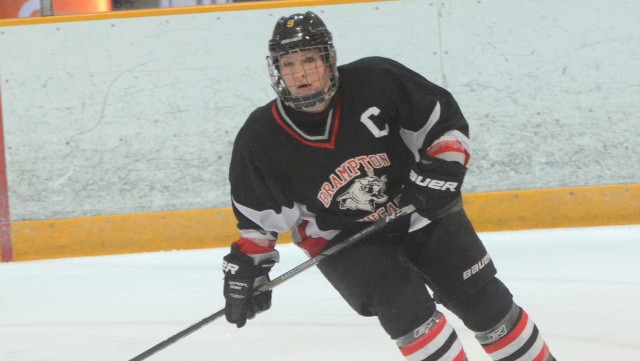 What sets Brampton apart from other Hometown Hockey stops? It’s the young city’s record of creating and supporting hockey for women and girls.

What sets Brampton apart from other Hometown Hockey stops? It’s the young city’s record of creating and supporting hockey for women and girls.

Even before the Brampton Canadettes were founded in 1963, girls made hockey history here: Jane Moran, from Walkerton was the first girl to play in the Brampton Lion’s International Novice Hockey Tournament. Now Dr. Moran, among her many national and international sports medicine assignments was serving as physician for the 2010 Vancouver Olympic torch relay that went through Brampton

In honour of International Women’s Day, we’ve put together a few fun facts on some of the builders, board battlers, and glove savers in the Brampton Sports Hall of Fame.

Fran Rider is synonymous with female hockey. The Brampton Sports Hall of Fame inductee played (and was scorekeeper between her games) in the first Canadettes tournament, co-founded the Ontario Women’s Hockey Association,of which she is still president, and has been inducted into the International Ice Hockey Federation Hall of Fame, and the Orders of Ontario, Canada, and Hockey in Canada. Rider is the first IIHF inductee for building the women’s game.

Rider organized the first women’s world hockey championship in 1987. The fact it wasn’t sanctioned by the IIHF didn’t stop her and she led the charge to ensure the games went ahead. When the IIHF finally added a women’s championship in 1990, she ensured Canada fielded a team despite a lack of financial support from the Canadian Amateur Hockey Association. But wait, there’s more! She led the drive to have women’s hockey included as an Olympic sport and succeeded with the 1998 games in Nagano.

Back when 2007 inductee Martha Branigan played for the Canadettes in a tournament during the 1970s, there were so few teams they were pretty much all ages. One roster had a grandmother and granddaughter teamed up on defence. Age was pretty much a relative thing: Branigan was on the Canadettes executive at age 15 and coached at 14!

It’s hard to imagine now but when 2006 inductee and old medal Olympian Gillian Ferrari’s parents went to the local rink to sign her up for hockey, staff insisted she take figure skating instead. Ferrari got her chance thanks to a court case by a current Bramptonian.

Justine Blainey (featured in the cover photo, courtesy of Peel Art Gallery Museum and Archives!) took the Metro Toronto Hockey League to court in 1986 after earning a spot on the 1981 Toronto Olympics and being barred from play because the league didn’t allow girls. Blainey lost the case in the Ontario Supreme court but won at the Ontario Court of Appeal. In total her battle to play with the boys took five court cases but she played for other MTHL teams. often listed as Justin Blainey. While playing for the University of Toronto Lady Blues she organized a one-woman campaign to stop the team from being cut for financial reasons, despite having won 13 of the last 15 provincial titles. She played for the National Women’s Hockey League’s Brampton Thunder in 1998-99. Now Dr. Justine Blainey-Broker, the chiropractor owns Justine Blainey Wellness Centre, volunteers with the Brampton Excelsiors and still laces up the skates with the Brampton Cougars and a men’s rec team.

Cassie Campbell-Pascall is a homegrown Canadian icon. There’s no shortage of firsts when it comes to Campbell-Pascall: first woman to do colour commentary on Hockey Night in Canada and first Canadian to captain consecutive Olympic gold medal teams in 2002 and 2006. Campbell-Pascall also has six world championships, an Order of Ontario, and an Order of Canada to her name but is equally renowned for her off ice efforts, earning the CWHL’s Humanitarian of the Year award in 2014. Ultra Canadian Content: her great great grandfather was Lucy Maud Montgomery’s uncle and Campbell-Pascall spent her childhood summers on the farm where the Anne of Green Gables author was married.

Hockey pioneer Jayna Hefford started her international career winning gold with Team Ontario at the 1994 national championship for girls under 18 and filled her trophy shelves with one silver and four Olympic gold medals, seven gold and five silver World Championships. During her days with the Thunder, Hefford topped the NWHL five times each as top goal scorer and most points in a season. After becoming part of the CWHL, her dominance continued earning MVP honours, the Angela James Bowl for top scorer and being the first CWHLer to reach 100 points. Since 2016 the Jayna Hefford Trophy is awarded to the most outstanding player during the regular season as selected by the players. Oh yeah, and she also scored Canada’s gold medal winning goal at the 2002 Olympics. She runs a hockey school with…

Lori Dupuis. The power forward and long time Brampton Thunder player was on the 2007-08 championship team and has amassed quite the trophy case: University of Toronto female athlete of year in 1996 and 1997, silver at 1998 Olympics, Olympic gold in 2002, and world titles in 1997, 1999 and 2000. Dupuis runs a mortgage broker business in downtown Brampton.

During her 10 seasons as captain, Vicky Sunohara led Brampton to two provincial titles and a national championship. A member of Canada’s national teams from 1989 to 2008 she was a three time Olympian: silver in 1998, gold in 2002 and 2006. Sunohara was stellar in international competition striking world champion gold seven times and silver once, and her six game winning goals are a world championship record.

Goaltenders are the last line of defence so our hometown hockey salute wraps up with Sami Jo Small. The CWHL co-founder backstopped the Brampton Thunder for two seasons, 1999-2000 and 2001-02. In her youth Small also excelled in track and field which earned her a scholarship to Stanford University in California. Following an injury she traded her discus and javelin for goalie glove and blocker to play for Stanford’s men’s team, earning divisional MVP honours en route to a mechanical engineering degree. The IIHF doesn’t officially recognize a Triple Gold Club – Olympic, World Championship, Clarkson Cup – for women but when they do Small makes that squad: 2002 Olympics, five time world champion (top goaltender twice!) 2014 Clarkson Cup. She was the first CWHL goalie to reach the 60 win milestone and still plays for the Toronto Furies.

With such an amazing history, the future for girls’ and women’s hockey is on the right track to a bright future.

Here are some amazing images of women’s hockey past in Brampton: