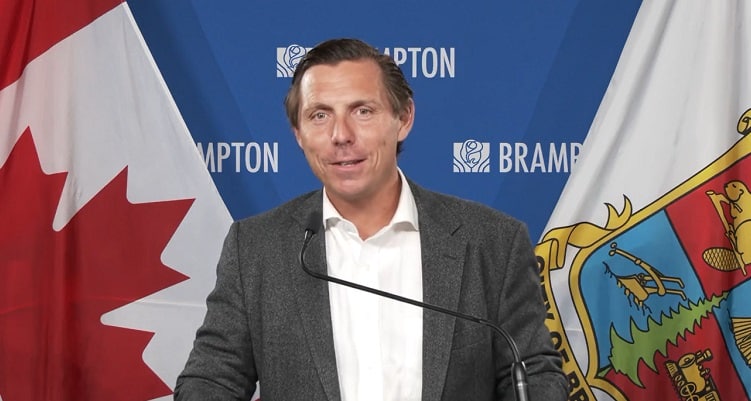 Despite calling an emergency meeting of council, Brampton officials did not create any sort of vaccine policy for city officials.

After hearing from two union presidents who spoke vehemently against mandatory vaccines, Mayor Patrick Brown and city officials unanimously agreed to keep discussing a policy that would include allowances for negative COVID-19 test results.

No timelines were included in the motion.

A spokesperson from the city responded to query on Twitter asking about details of the mandate.

“Council voted to develop a vaccine policy with testing alternatives which is what Mississauga adopted,” said the statement.

Last week, during an exclusive interview with insauga.com publisher Khaled Iwamura, Brown said he personally was in favour of a full mandatory vaccine policy. However, he voted in favour of the guideline that calls for a myriad of exceptions.

Frank Vani, president of Brampton’s Amalgamation Transit Union (ATU) and Fabio Gazzola, president of the local CUPE union, were both strongly against any sort of vaccine mandate.

Vani listed several reasons people have come to use against vaccination, including that they’re not yet approved for clinical use in Canada and that everyone should be able to make their own decisions.

Vani also pointed out that the ATU has a three-year contract with the city and it would be unconstitutional to force members to get a vaccine. He said legal means are being investigated in cities like Toronto and Mississauga where some sort of policy has been enacted.

“I’m not anti vaccine,” he said. “Just anti-force. It’s a slippery slope when you start forcing people into things.”

Michael Palleschi, councillor for wards 2 and 6, said he sympathized with Vani’s position.

“I’m on your side. I don’t approve of forcing anyone to do anything,” he said.

Gazzola, who said he represents about 1,200 municipal workers in Brampton, was just as strongly against mandated vaccines.

“We’re tired of being attacked and blamed for everything. Workers are being blamed for spreading COVID-19 and that we’re the problem and need to be protected from ourselves.”

Gazzola said we’re not at the point yet of needing mandated vaccines.

“This should be a last resort, and I don’t think we’re there.”

He said when a CUPE member comes to him and says they don’t want to work with someone who isn’t vaccinated, “I ask if they’re vaccinated. And when they say yes, I ask them then what’s the problem.”
This sentiment, of course, goes against every single reputable scientific and medical study that shows how efficient vaccines are at limiting the spread of COVID-19 as well as reducing severe symptoms.