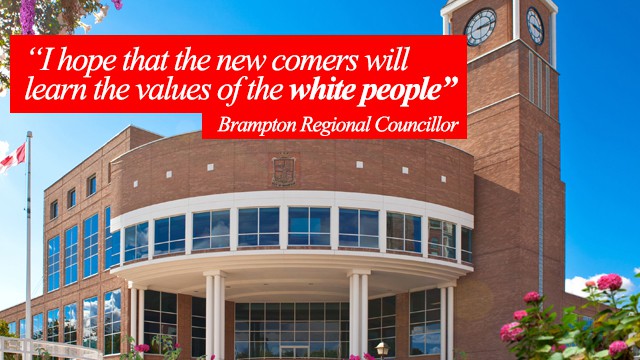 A long-standing Brampton councillor appears to have recently made racially insensitive remarks in an email exchange with a resident.

A long-standing Brampton councillor appears to have recently made racially insensitive remarks in an email exchange with a resident.

Brampton City and Regional Councillor John Sprovieri has been in office since 1988. His biography states that he retired from working at the Ford Plant in Brampton 17 years ago and now focuses strictly on his duties in council. Now, it looks like he’s in some hot water, particularly responding with some rather odd responses to a constituents.

InBrampton recently obtained some email exchanges between Councillor Sprovieri and a constituent. After disseminating her extensive emails, which were under the subject line “Why are White People still planning Brampton’s future?”, the constituent’s gripe was apparently over the recent hiring practices at City Hall and she asked why Brampton, a city with up to two thirds of visible minority population, still has ‘white people’ running things in Canada’s ninth largest city. Specific references were made to CAO Harry Schlange, and the recent hiring of former Vancouver urban planner Larry Beasley.

The initial email was sent not only to Sprovieri but Mayor Linda Jeffrey, several other city councillors, specific members of local media, names that I recognize as either local business leaders or members of citizens groups, and at least one Member of Parliament. But Sprovieri chose to respond to this constituent’s extended tirade on the city’s hiring practices with the following during the last week of June before Canada Day:

To be fair, people of all races, colour and creeds are eager to come to Brampton and Canada because the white people of this nation have developed a great system where everyone is welcome and can live peacefully together. I hope that the newcomers will learn the values of the white people so that Brampton and Canada will continue to be a favourite destination for people who want a better and peaceful lifestyle.

The constituent went on to respond to this email from Sprovieri about newcomers and ‘white people’ with a long diatribe about atrocities committed by white people over the course of history (i.e. the Crusades, the enslavement of Africans, what Canada did to her Indigenous population when ‘white people’ first settled here; even the Nazis were mentioned at some point). She also made comments regarding current demographic trends, to which Sprovieri provided the follow up response:

Thank you for the history lesson. As you have noted, humans of all races have skeletons in their closets, some bigger and some smaller. As you are well aware, there was a great destruction of humankind about 12,000 years ago caused by the Big Flood. The Jewish Bible tells us that God caused the Flood to happen to cleanse the earth of Human corruption.

As you are also aware, the Human race may be headed that way again with Global Warming.

Just to bring you back to reality, the discussion is about today and how Canada was developed by the white folks of French and British background. People of all races have come to this land and are able to live together in peace and harmony, because of the system that those folks developed. The reason why we are all hear is because Canada is Number 1. Happy Canada Day to everyone.

inBrampton.com has since reached out to Sprovieri to invite him to clarify or explain his remarks.

Councillor Sprovieri also hit the Reply All button when he sent out his responses, so the rest of the people that the constituent emailed also received his comments, which included Mayor Linda Jeffrey who provided this response:

Unfortunately, my office was recently included on an email exchange between Councillor Sprovieri and a resident on corporate email.

I believe the original intent of the correspondence was to complain about hiring practices at the City of Brampton but it has become clear that the correspondence has now deteriorated into a disrespectful, crude and insensitive tirade about ethnicity.

As a City, and as a country that is struggling to find the right language and respect for indigenous people and their role in our past, I find it disheartening to hear such insensitive language being used by a member of my Council. Unfortunately, this is not an isolated incident. I urge my colleague to seek some diversity training in order to better understand the role of multiculturalism in building our national fabric.

Although residents may take issue with Sprovieri over his stance on the LRT (he’s opposed), this is a decidedly serious issue. Personally, this is my first time hearing comments like these from the councillor, so Mayor Jeffrey’s remarks about how this is not an isolated incident will have to be explained by her office. If I were advising Sprovieri on how to word his reply more thoughtfully, I would have just said ‘newcomers learning the values of Canada’ or something to that effect.

It’s shocking that he didn’t word his email that way and instead attributed Canadian values to “white people.”

One final note about John Sprovieri, this is not the first time he has struggled a bit with the English language when attempting to articulate his opinions. In 2006, he was a candidate for Stephen Harper’s Conservatives, running to be an MP in Bramalea-Gore-Malton. He ended up losing quite badly, but during that campaign he found himself in hot water for apparently copying and pasting policy positions on his website from a fellow Conservative candidate out in Surrey, British Columbia. This fellow Tory happened to be a Indo-Canadian female, and what Sprovieri (a middle aged man) put up about his views on abortion were, to put it mildly, comedic gold.

A Conservative government, regardless of individual member’s views, will not table legislation concerning abortion. As with other existing laws, we will not contradict the constitution on this matter. If the issue were to come up in the House, I would vote according to the will of my constituents. I would poll residents and speak with them to gauge how they want me to vote. As your representative in Ottawa, my opinion doesn’t matter. If you want to know my opinion, I am a woman, end of discussion.

Although communication doesn’t come easily to anyone, these gaffes are beyond the pale and residents have good reason to be very alarmed.