Brampton Civic is Getting a Few More Hospital Beds 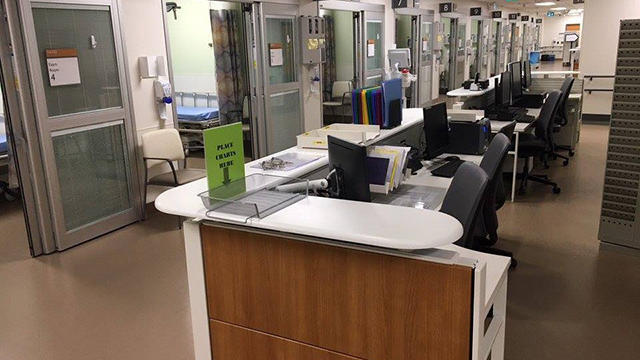 It’s no secret that overcrowding is an issue at Brampton Civic.

It’s no secret that overcrowding is an issue at Brampton Civic. There are not enough beds to support the volume of patients, but there was room in the Ontario budget to address the issue, and now, the province is delivering on its promise.

If only by a few beds.

The Government of Ontario is funding an additional 2,000 patient beds and spaces – more than 1,200 additional hospital beds included – across the 14 Local Health Integration Networks (LHINs) across the province. That includes the Central West LHIN, which covers Brampton Civic. The Brampton Civic site of the William Osler Health System is officially getting six new beds, according to the province.

Six new beds might not sound like much, but there are also 31 additional beds/spaces that are allocated to the Central West LHIN. Those 31 beds haven’t been allocated to a particular health care service provider within the LHIN, but they will eventually be allocated based on need.

Hopefully, Brampton Civic will be able to cash in on some of those.

“This funding comes as hospitals are preparing for an annual increase in demand due to the approaching flu season,” said the province in a statement.

The number of funded beds at Brampton Civic Hospital is currently about half of the provincial average of 2.3 beds per 1,000 people. Current census data shows that the city boasts a population of 593,638 (a notable increase from the 523,906 it clocked in at in 2011). As of May 2017, there were only 608 beds available, though to support our population (and its constant growth), we would need well over 1,000.

That average is lower than anywhere else in Canada, according to health-care advocacy group the Ontario Health Coalition (OHC).

This year has definitely been one of overcrowding and often unpleasant experiences at Brampton Civic Hospital. If you recall, for instance, back in March, Jamie-Lee Ball was stuck on a stretcher in a busy hallway for five days in extreme pain and suffering from internal bleeding. According to the Ontario NDP, that kind of overcrowing at Brampton Civic isn’t getting better – it’s getting much worse.

In Ball’s experience, the hospital was overcrowded to the point where there were not enough pillows available for patients. However, it appears staff were doing their best with available resources. Code Gridlock was in effect at the time, which means the hospital was overcrowded. Last year alone, Brampton Civic had 10 Code Gridlocks, according to according to NEWSTALK 1010.

However, work is being done, though incrementally.

According to Measuring Up 2017, Health Quality Ontario’s yearly report on the performance of Ontario’s health system, many parts of Ontario’s health system are working well or better than before, such as the fact that more patients are receiving cancer surgery within maximum wait time targets, more people are getting high-priority MRI and CT diagnostic scans within maximum wait time targets, and care for residents in long-term care homes is improving.

That’s all well and good, but when it comes to hospital beds and wait times – whether to be admitted or to see a doctor – Ontario is facing challenges across the board.

Health Quality Ontario said that “Ontario’s health system still faces significant challenges, such as people having to wait too long for certain forms of care, not getting the care they need as they transition between parts of the system, or not having equitable access to care.”

But the province is working on it.

Hopefully, the guaranteed six beds – and the possible extra few from the 31 additional beds designated to the Central West LHIN – coming to Brampton Civic will provide at least a little relief to patients and staff for the time being.