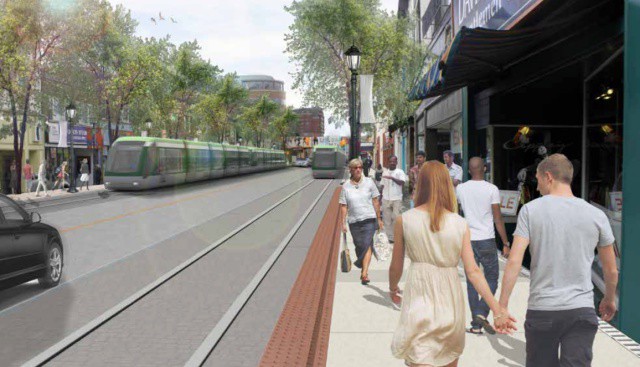 Though Brampton city council infamously nixed the Hurontario Light-Rail Transit (LRT) project running into the city’s downtown core, the city has one again picked up the task of studying alternate


Though Brampton city council infamously nixed the Hurontario Light-Rail Transit (LRT) project running into the city’s downtown core, the city has one again picked up the task of studying alternate routes for the LRT in Brampton.

Currently, the Hurontario LRT project is set to run from Port Credit GO in Mississauga to Brampton Gateway Terminal, boasting 22 stops with three of them in Brampton. Brampton City Council voted last year to spend $4.4 million to conduct environmental assessments on proposed LRT routes along either Kennedy or McLaughlin Road.

The city held its first LRT open house on April 25 to begin the conversation on alternate routes.

Above ground, ground level, and even underground routes are being studied, with the goal in mind to ultimately connect the Brampton Gateway Terminal stop to the Brampton GO station near Brampton’s new university. The university is planned for the land adjacent to the GO station, on top of the parking lot at Church and Mill.

Here is the map showing different alignments that are being considered.

Many residents came out to share their input on the alternatives.

Residents were able to place sticky notes with opinions and suggestions across the alternate route maps.

Some residents agreed that the city should reconsider running the LRT straight down Main, which was rejected by city council back in 2015, leaving many Bramptonians wondering why. The province had even offered the city millions of dollars to extend the LRT onto Main Street.

One Bramptonian wrote that the Main Street LRT is “perfect.”

The introductory open house kicked off this study, so there’s more to come.

This is a long-term project. While the current plans for the Hurontario LRT could see it running by 2022, some are apprehensive about when Brampton will actually see stops north of Brampton Gateway Terminal.

Councillor Gurpreet Dhillon once projected that it could be 10 years before there’s an LRT north of Brampton Gateway Terminal.

The city has hired HDR Inc. to study alternate routes.

We’ll keep you posted on what happens next.

Where do you think the LRT should be extended in Brampton?