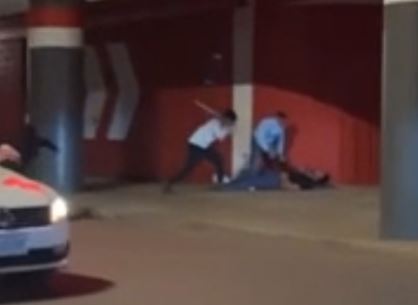 Video posted online appears to show an alleged assault and attempted murder in Brampton on April 16, 2022.

Police are looking into a video posted online which appears to show a brutal attack on two men in Brampton and may be linked to an attempted murder investigation.

In the video shared on Reddit, a white Volkswagen is seen parked outside of the Bowlero bowling alley on Bramtree Court in Brampton while a group of men appear to attack at least one victim with weapons.

Two men are seen repeatedly striking a male victim with fists and what appears to be a bat or a stick.

The victim is seen falling to the ground as the attackers continue their assault while another group of men appear to continually strike a second victim not seen on camera.

Users online say the video – which appears to be filmed by a bystander in a nearby vehicle – allegedly captures an incident that police are investigating as an attempted murder.

Around 12:45 a.m. on Saturday (April 16), police say two victims were at a business in the area of Bramtree Court and Chrysler Drive in Brampton when they were attacked by a group of four men armed with weapons ranging from sticks to bats.

Police say the suspects fled the area in a white 2015 Volkswagen Jetta with Ontario licence plate CFEB 295, which appears to be the same vehicle seen in the video.

One of the victims suffered life-altering injuries while the second victim’s injuries were non-life-threatening.

A police spokesperson said Peel Regional Police are aware of the video and the police are continuing their investigation.

Warrants have been issued for two of the suspects in the alleged attempted murder.

Manjot Singh, 25, of Brampton (left photo above) and Gurkirat Singh (right photo above), 24 of Markham, are both wanted for

Peel Regional Police said on Monday that investigators had not identified the other two suspects and urged anyone involved in the incident to turn themselves in to police.

“Investigators are working diligently to obtain their identity and bring them before the courts,” Peel police said. “All of the involved suspects are encouraged to speak with legal counsel, and make arrangements to surrender to police.”

You can also contact Peel Crime Stoppers anonymously at 1-800-222-TIPS (8477) or online at peelcrimestoppers.ca.