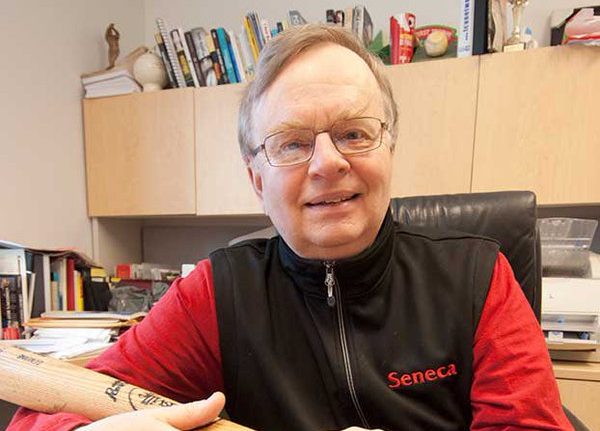 Canada’s most noted and most accomplished baseball historian has a new honour for his mantel: Order of Canada.

Bill Humber, who has 12 books on baseball, sports, the environment, and his hometown of Bowmanville, was inducted as a member in the Order today by Governor-General Mary Simon “for his contributions as Canada’s premier baseball historian, who has highlighted the key ways in which the sport’s history is linked to our nation.”

The Order of Canada is the highest civilian honour in Canada,

Recognition for his accomplishments in his chosen field is not new to Humber, who was inducted in the Canadian Baseball Hall of Fame in 2018 and currently serves as a selector for the same Hall. He is also a former selector for Canada’s Sports Hall of Fame and the Clarington Sports Hall of Fame, a Queen’s Golden Jubilee Medal recipient and in 1989 he was a subject specialist at the Royal Ontario Museum for an exhibit on baseball.

“It’s kind of like a lifetime achievement award,” Humber said from his Bowmanville home today, adding he was “humbled” by all the congratulatory calls he had already recived about the honour. “It has been great.”

“To quote Garret Morris from the old Saturday Night Live bit, ‘baseball’s been berry, berry good to me.’”

Big congratulations to 2018 Hall of Famer Bill Humber for being honoured with the Order of Canada.
The Order of Canada is one of our country’s highest civilian honours. Its Companions, Officers and Members take to heart the motto of the Order: DESIDERANTES MELIOREM PATRIAM. https://t.co/AwYJbywQyt

Now 72, Humber has been writing about baseball since his first book, Cheering for the Home Team: The Story of Baseball in Canada (Boston Mills Press), was published in1983. His library also includes a couple of books about Bowmanville – The History of Central Public School in Bowmanville (with Doris Falls), 1989, and Bowmanville: A Small Town at the Edge, 1997 – but his passion is, and always has been, baseball.

He is currently working on a book on the history of baseball in Ontario pre-1880, and is getting ready for his 44th consecutive year of Baseball: Spring Training for Fans, a college course that ran at Seneca College for many years and is now on ZOOM.

Humber has no idea who nominated him for the honour but was made aware he was joining the Order – under an ‘order’ of silence – about three months ago.

Created in 1967, the Order of Canada recognizes outstanding achievement, dedication to the community and service to the nation. More than 7,000 people from all sectors of society have been invested into the Order and get to wear its iconic snowflake insignia.