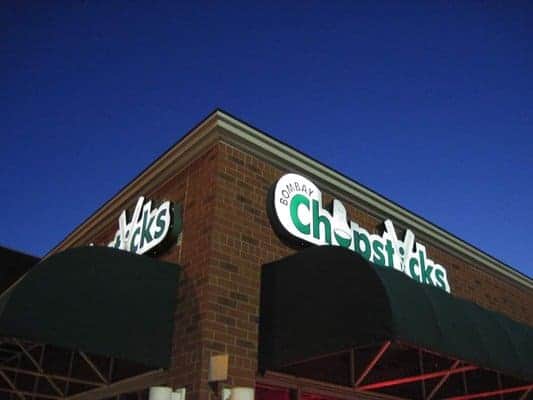 One lull Thusday evening in October, my developer and I needed a place to talk about insauga.com, as well as eat a delish meal because we were both starving. The one thing we also needed was WIFI.  We told each other that we would never eat at the same place two times in a row, so we ended up at Bombay Chopsticks – a place that neither of us had the opportunity to visit before.  I must say, it was a welcome surprise!

As soon as we walked in, we asked if there was WIFI and the man who I assumed was the owner said “no problem, we have it, come sit down”. We hooked up our laptops and ‘data-less’ smartphones to the Wifi network and DAMN was it a strong connection!  Bonus!

The space in the restaurant was fairly small and kind of seemed like the type of family-owned Chinese restaurants that you would see driving up north to places like Orangeville or Collingwood. Don’t get me wrong though; I’m not knocking or criticizing its décor; I’m just saying that it’s quaint, comfortable, and cozy.

Bombay Chopsticks serves Chinese food with spices usually found in Indian food (Hakka) and they fuse it together with traditional Chinese cooking to create some of the best Chinese dishes I’ve had in a while!

Once all the dishes were out, we put our WIFI-enabled tech away and started to chow down!  First thing we had was the Manchurian fish, which was cooked just right with tons of sauce and tasty vegetables. The Shrimp Fried Rice was equally impressive with huge shrimps you can actually see and lots of them.  The rice was fried just enough to illuminate the intricate blend of Hakka and traditional Chinese flavours! But, the biggest surprise was the Manchurian Chili Chicken.  I swear, to this day, this dish was one of the best I’ve had at a Chinese restaurant. Ever!

I’ve developed a liking for spicy food because of my visit to Bombay Chopsticks.  You can consider me to be a ‘spice nOOb’, but in my opinion the Manchurian chicken had the perfect amount of flavourful spices. It was just spicy enough so that your nose and eyes water a little, but not enough that you’re running to the washroom or calling out for milk.

The prices at Chopsticks were reasonable, between $7 and $14 for a plate, which would make this a perfect place for a casual date or just a quick meal after work.

Overall, I would say Bombay Chopsticks is definitely worth at least one visit, so go check it out!