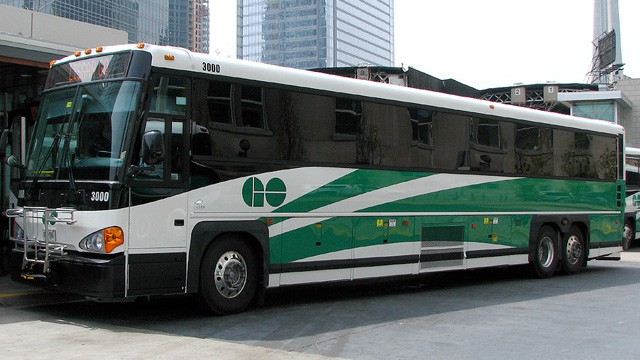 Being trapped in a vehicle with someone who may have a bomb – nightmare fuel for most people, but a reality for the 15 passengers riding a GO bus Saturday morning.

The bus, travelling along Highway 407 from Guelph to Square One, had to be evacuated when a 28-year-old Hamilton man claimed to have an explosive.

Around 10 a.m. a passenger on the double-decker bus reported to the driver that another passenger was acting very agitated and said he had a bomb.

“Our driver took it seriously, like he should have, and called the OPP (Ontario Provincial Police) immediately as well as our own dispatch,” said Metrolinx spokesperson Anne Marie Aikins.

The driver was told to pull the bus over and keep all passengers onboard until the police arrived.

“Some were pretty agitated,” Aikins said. “Some were up on the second floor, so weren’t as aware of what was happening.

When police arrived, they negotiated with the man via the driver’s cellphone.

Eventually everyone was let off. The man came out some time after and surrendered himself into police custody.

The rest of the passengers were escorted to another bus and transported to a Burlington OPP station. No one was hurt, thankfully.

The roadway, between Derry and Britannia, remained closed in both directions during the afternoon as the OPP continued to investigate.

There’s no word yet on what charges will be pressed.

A Hamilton man that is 28 years old has been charged with mischief after allegedly telling a passenger on a GO Transit bus that he was carrying a bomb forcing the closure of Highway 407 for several hours Saturday.