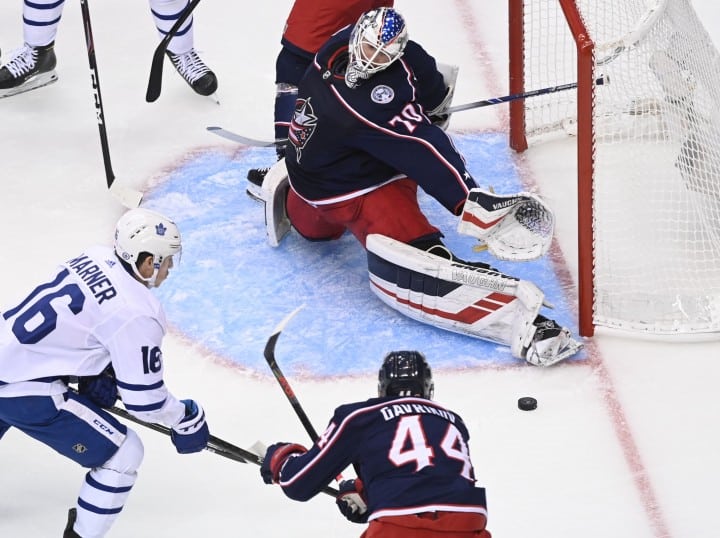 The Maple Leafs fired blanks when it mattered most — and ran out of miracles.

Now Toronto’s talented, high-powered roster has a long time to contemplate what might have been.

Joonas Korpisalo made 33 saves as the Columbus Blue Jackets shut out the Leafs 3-0 on Sunday to win their best-of-five qualifying round series 3-2.

Toronto staged a stunning comeback down 3-0 with under four minutes to go in Friday’s Game 4 to stave off elimination before winning in overtime to force the decider, but were unable to figure out a way through a stingy, defensive-minded opponent.

“We knew it would be a challenge,” Leafs captain John Tavares said. “We have to find a way to break through.”

Unfortunately for Toronto, that didn’t happen for a group that sat second in the NHL with 237 goals when the season was suspended in March because of the COVID-19

The Leafs were bested 10-3 at 5-on-5, and weren’t able to get anything going at even strength after rookie Nick Robertson, who didn’t dress Sunday, scored midway through Game 3.

“We knew when they get their leads they just locked down the neutral zone,” Toronto winger Mitch Marner said. “We had some chances. They just didn’t go in.”

Columbus, the No. 9 seed in the Eastern Conference as part of the NHL’s 24-team restart to its pandemic-hit campaign, will now face the Tampa Bay Lightning in the usual 16-slot playoff bracket.

“We don’t do it the easy way… I’m proud of them,” Blue Jackets head coach John Tortorella said. “I thought (Korpisalo) was outstanding, made key saves at key times.

“It’s a good group of men trying to find their way.”

Zach Werenski, rookie Liam Foudy, with his first NHL goal, and Nick Foligno, into an empty net, scored for the Blue Jackets, who lost Artemi Panarin, Matt Duchene and Sergei Bobrovsky in free agency last summer, but still found a way to advance.

Frederik Andersen stopped 19 shots for No. 8 Toronto, which hasn’t won a post-season series since 2004.

“Columbus defended extremely well and didn’t give us a great deal, but we had enough chances to score more goals in the two shutouts,” said Leafs head coach Sheldon Keefe, also alluding to his team’s 2-0 loss in Game 1. “(If) we had more luck, it might have been a different result. I’m not sure where it’s gonna finish up, but we ended up shooting at about two per cent 5-on-5. For a team like ours to score on two per cent of its chances, I think anybody coming into the series would say it’s pretty unlikely.

Korpisalo started the first three games, including that shutout in the opener, before getting pulled with his team trailing 3-0 in Game 3, but got the call with Elvis Merzlikins unfit to play.

“We were all nervous as the season started with the departures,” Tortorella added. “We were nervous with what are goaltending was gong to be. We don’t have a sniff being here if it’s not for those two guys.”

In the climax of series accented by dramatic momentum swings — Toronto fell 4-3 in overtime in Game 3 after blowing a three-goal lead before staging that stunning comeback the following night — Columbus opened the scoring at 6:29 of the first period.

After leaving Friday’s Game 4, Werenski floated a shot from the point that hit Leafs defenceman Tyson Barrie in front and sailed past a surprised Andersen inside an empty Scotiabank Arena.

Keefe loaded up his top line with Tavares, Marner and Auston Matthews, and the trio was buzzing in the offensive zone most of the first two periods. Tavares had his team’s best chance of the opening 20 minutes, but his rushed shot at a wide-open net hit the post and stayed out.

“My hand slipped just a tad,” Tavares said. “Unfortunately, (the puck) was maybe half an inch, quarter of an inch too much to the right.”

The Toronto netminder had to be sharp early the second after Justin Holl turned the puck over. Foudy had one shot before Oliver Bjorkstrand followed up with two more. Tavares and Matthews then came close on Korpisalo, while Foligno forced a good pad stop out of Andersen.

Already without Jake Muzzin after he was stretchered off late in Game 2, the Leafs went down to five defenceman not long after when Boone Jenner rocked Barrie in the corner. The Toronto blue-liner stayed down for time, went straight to the locker room and did not return.

The Leafs got their first power play when Werenski crosschecked Tavares, but both Toronto’s captain and Matthews couldn’t find a way through Korpisalo on good chances.

William Nylander forced a good save out of Korpisalo early in the third after the Leafs killed a Columbus power play.

Toronto continued to push, but Foudy made it 2-0 at 11:20 when he snuck a shot under Andersen on a play that materialized out of nothing.

“Amazing,” said Foudy, a Toronto native. “Growing up being a huge Leafs fan, always going for them, to come here play in a series and beat them and score my first NHL goal is something I won’t forget. A special moment.”

Andreas Johnsson, who underwent knee surgery in February and was a surprise addition to the Toronto setup after being activated off injured reserve, was robbed by Korpisalo moments later on a terrific opportunity.

Unlike Friday’s chaotic finish, the Blue Jackets killed the game off from there, with Foligno icing it into an empty net, and will now play Tampa — the Presidents’ Trophy-winning team they upset in last season’s first round with a four-game sweep — in the normal playoff format.

The Leafs, meanwhile, are left to pick up the pieces following another post-season disappointment that comes on the heels of consecutive Game 7 playoff losses to the Boston Bruins.

Notes: Fans in both NHL hub cities, Toronto and Edmonton, saw their teams eliminated in the qualifying round of the restart. The Oilers lost to the Chicago Blackhawks in four games. … Andersen dropped to 0-8 with an .877 save percentage and 3.49 goals against average in his last eight potetial series-clinching appearance. … Toronto will be part of the second phase of the draft lottery Monday with the seven other losers from the qualifying round. Each club has a 12.5 per cent chance of securing the No. 1 pick. … Muzzin watched the game from the stands. … Johnsson took the place of rookie Nick Robertson. … Blue Jackets defenceman Ryan Murray returned to the lineup after missing Game 4.

This report by The Canadian Press was first published Aug. 9, 2020.