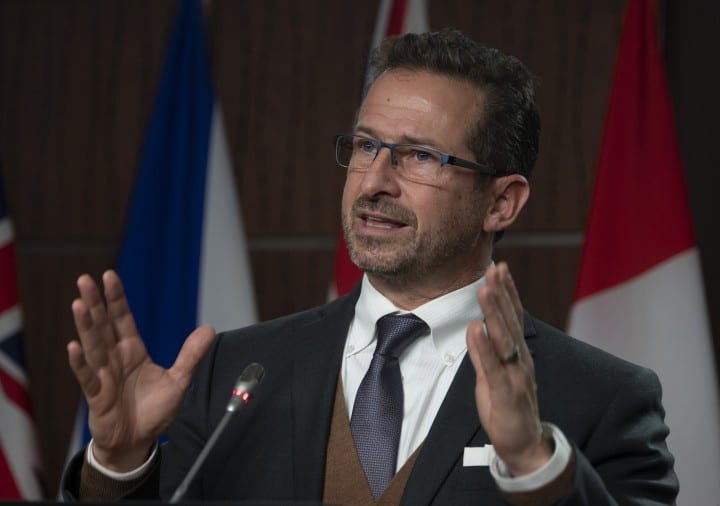 Bloc Québécois Leader Yves-François Blanchet is standing by comments he made about Transport Minister Omar Alghabra earlier this month that sparked criticism he was trying to tar the new cabinet member with Islamophobic innuendo.

Blanchet addressed the blowback nearly two weeks after what Alghabra dubbed a harmful and “dangerous game” of insinuation by the Bloc.

Blanchet released a statement Jan. 13 that pointed a finger at Alghabra’s association with what the Bloc called “the political Islamic movement.” The leader said “questions arise” over Alghabra’s former role as head of the Canadian Arab Federation, but hedged that he “refuses to accuse” the minister of anything specific.

“Quebecers have questions in the matter of secularism and of security. I posed a legitimate question very politely, in an irreproachable way, and the government and the prime minister have an obligation to respond,” Blanchet said told reporters Tuesday.

Those questions were rooted in previous stories and columns by national and provincial media outlets, he added.

Deputy Prime Minister Chrystia Freeland called on Blanchet during the daily question period Tuesday to apologize to his fellow MP across the virtual aisle.

Alghabra has faced attempts to sow doubt about his background before.

In 2018, Conservative Sen. Denise Batters apologized to the Saudi Arabia-born parliamentarian after she wondered aloud why reporters hadn’t questioned the then-parliamentary secretary to the foreign minister about his place of birth.

Blanchet referred to articles “from the very Toronto and not very independentist Globe and Mail” to bolster his case about media scrutiny of Alghabra.

The Bloc leader’s office forwarded a 2016 Globe column relating to a Conservative motion about Israel that was backed by the Liberal government.

“Mr. Alghabra has long been dogged by accusations he is an extremist, even though his positions on Israel-Palestinian issues are mainstream,” the article reads.

The Centre for Israel and Jewish Affairs has consistently played down any concerns, the piece notes.

“We are not aware of any substantive or proven links Mr. Alghabra has to Islamist or political extremism,” David Cooper, the centre’s vice-president, is quoted as saying in another Globe column earlier this month.

Cooper cited allegations “that amount to charges of guilt by association,” and said his organization has “never seen any substantive evidence that would trigger any concern.”

Alghabra was president of the Canadian Arab Federation before being elected as a Toronto-area Liberal MP in 2006.

In 2009, then-citizenship and immigration minister Jason Kenney opted to cut funding for the Canadian Arab Federation, whose leader at the time made statements that Kenney called anti-Semitic and supportive of terrorist groups.

The Bloc’s attempt to undermine confidence in Alghabra follows his move to distance himself from a YouTuber who has expressed intolerant views toward LGBTQ communities.

Alghabra said in a Jan. 12 statement he is a longtime advocate for LGBTQ rights and was “shocked and disappointed” to learn of a video using homophobic slurs that was posted online by Fadi Younes, whose digital marketing agency Alghabra had hired on a contract that has since been terminated.

“I was not aware of these comments before today and I wholly reject them,” said the MP for Mississauga Centre.

“We must combat ignorance, hate or intolerance in our society. I will continue to support LGBTQ rights, as we continue to build a more inclusive and tolerant society for everyone.”