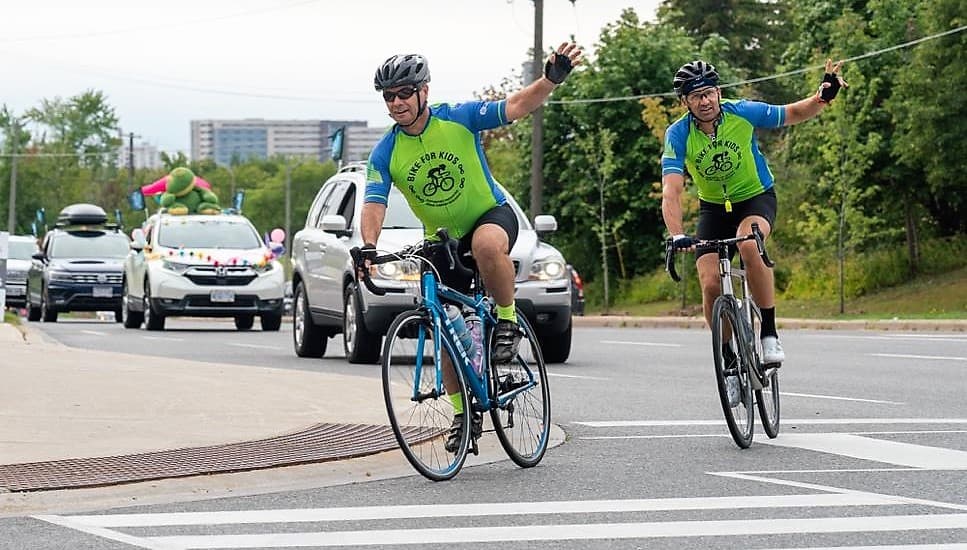 The 150-kilometre Bikes For Kids fundraiser will start in the east-end of Toronto at 8 am and end in Niagara Falls’ Fireman’s Park (2275 Dorchester Rd) at about 5:30 pm this Saturday (August 13).

So what is the significance of 150 kilometres?

It turns out that was the daily distance that cyclists Nir Meltzer and Sean Squires, founders of Bike for Kids, did on each leg of their legendary 6,500 km cross-country ride exactly five years ago.

The fundraiser is collecting cash for The Meagan Bebenek Foundation, a Canadian charity that has raised over $6 million in support of paediatric brain tumour research as they are the leading cause of cancerous deaths in children in Canada.

“This is such a special ride for us and we are thrilled to lead this year’s Bike For Kids in support of an organization that means so much to us and to so many others,” said Meltzer.

“As we embark on the fifth anniversary of our cross-Canada ride, we encourage everyone to either support a rider or think about how they can get their community involved in an activity to help make a difference in the lives of children suffering from brain tumours.”

The Meagan Bebenek Foundation was founded in 2001 by Denise Bebenek to address the lack of funding for paediatric brain tumour research and share a message of hope after she lost her five-year-old daughter, Meagan, to an inoperable brain tumour.

“We are so excited to be hosting Bike for Kids and we invite all to come out and cheer on the riders as we come together to raise funds for children affected by brain tumours,” said Bebenek.

“We thank cyclists Nir Meltzer and Sean Squires, founders of Bike for Kids, who will lead this year’s ride and mark five years since completing their legendary 6,500 km Bike For Kids cross-country ride to raise awareness about paediatric brain tumours.”

To sponsor the Bike For Kids riders or to donate, visit meaganshug.com