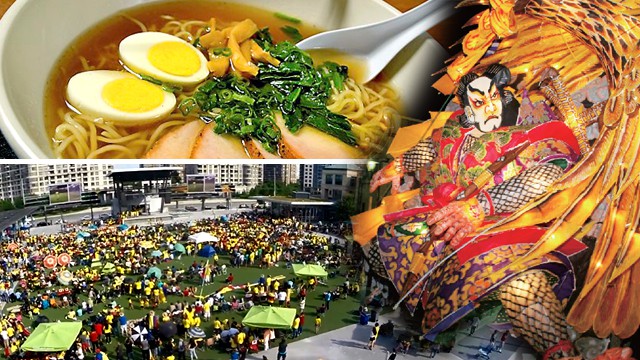 If you’re a big lover of Japanese food and culture and want to celebrate the country (and perhaps your heritage, if you call or have called Japan home), you won’t have to travel far to do it.

Japan Festival Mississauga 2016 will be held at Celebration Square on July 10 and the inaugural festival will boast booths run by popular Japanese restos, Japanese beverage booths, traditional Japanese music, entertainment, live performances and more. The event is being held to celebrate the 35th anniversary of Mississauga’s relationship with its Japanese sister city, Kariya.

A Bon Odori — a traditional Japanese square dance — will also take place during the wrap-up and is open to all sponsors, performers and attendees.

The festival will be the largest Japanese event ever held in Canada and is meant to introduce “Wa” or “True Japan” to Canadians. The soiree will obviously celebrate one of Japan’s greatest and most crucially important exports (food) and will be run similarly to a traditional Japanese summer festival (or Matsuri).

If you’re a big fan of Japanese beverages, you can visit the festival’s beer and sake booths for a taste of some of the country’s most famous libations. In terms of activities, there will be designated areas to play traditional games and immerse yourself in the culture.

The event will also be emceed all day long by insauga.com‘s very own Khaled Iwamura. Not many people know this, but Khaled is half-Egyptian and half-Japanese and is an accomplished traditional Japanese drummer. He’s pretty excited to guide you through Canada’s biggest Japanese event to date–especially since the event is happening in his very own backyard.

Since Mississauga’s long-standing partnership with Kariya — which began on July 7, 1981 — is spurring the one-of-a-kind event, the festival will kick off with an anniversary ceremony to celebrate the partnership and the histories of both cities.

If you want to learn more about Mississauga’s relationship with Kariya, click here.

The Most Popular Japanese Restaurants From Toronto Coming to Mississauga This Weekend!

The biggest Japanese festival in Canada is coming to Mississauga’s Celebration Square this Sunday, with much to discover in terms of Japanese culture, entertainment, and of course, food! Read more