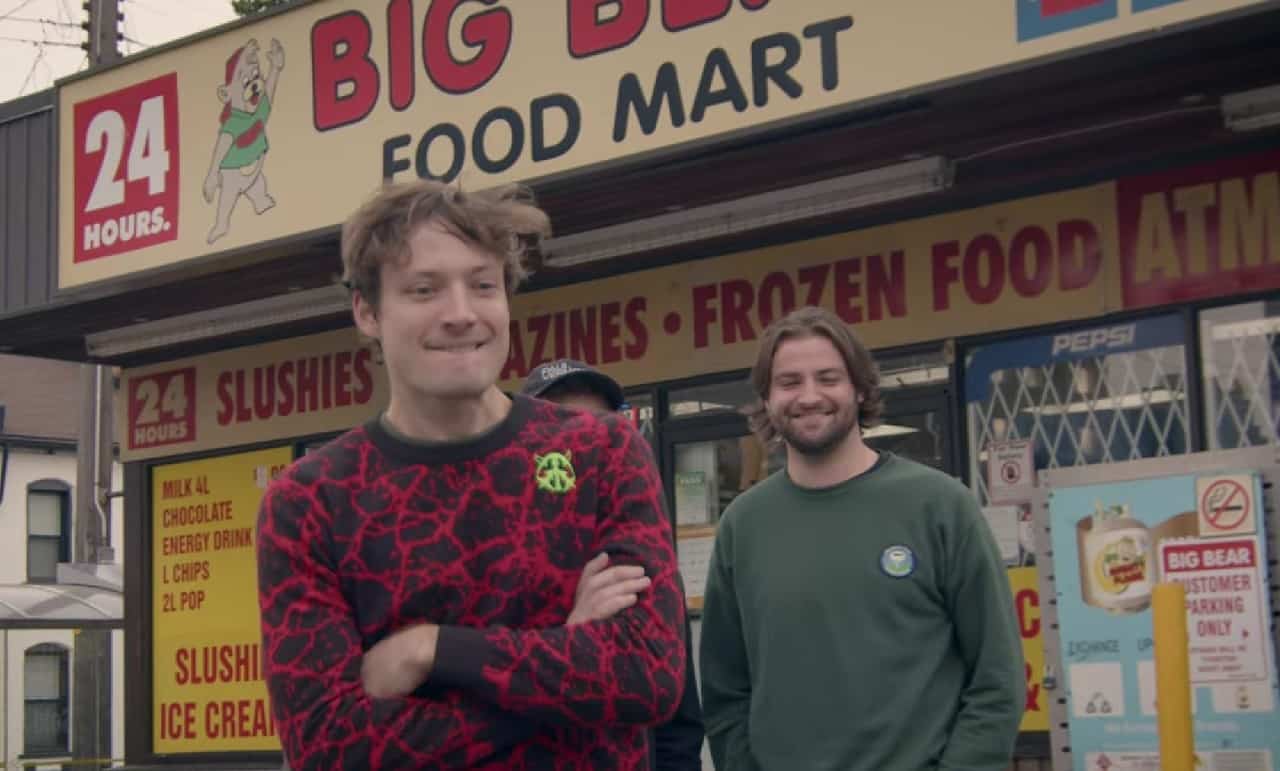 Weaving an ode to being eager, creative and noctural through the aisles of a Hamilton corner store is at the heart of The Dirty Nil”s first new music since they were nominated for the 2022 Rock Album of the Year Juno.

The trio has a new single out, “Bye Bye Big Bear,” whose official music video was actually shot inside and in front of the Big Bear Food Mart convenience store on the southeast corner of Wellington St. N. and Wilson St. in the Beasley / Lansdale area. For several years, members of the band — presently a power-punk trio of Luke Bentham, Kyle Fisher, Sam Tomlinson — lived across the street from that very store, and relied on it for sustenance and quick-energy boosts as they put in the hours to develop their sounds.

“There we were nurtured with sparkling water, protein bars and cigarettes,” is how the band tells it in a recent media release. “There we witnessed an untold number of human dramas play out in the parking lot, ranging from the hilarious to the hopelessly sad. For 5 years it was our clubhouse, our pirate ship, our prison.”

The lyricism also touches on the vibe of the band’s former neighbourhood, with Bentham intoning, “When the sirens cease to wail / will you miss the sound? / when the trucks don’t shake your walls / will you miss downtown?”

Residents of that particular cranny of Hamilton can likely relate. Heavy industrial trucks that rumble along Wellington and Wilson streets throughout the night, although Wilson was included in the city’s updated truck route master plan that will soon take effect. Not only that, but Hamilton General Hospital, the Hamilton Police Central station and a fire station are also close by, so emergency vehicle sirens are a common sound.

There is also occasional accompaniment from the whirr of the blades of air ambulance helicopter bringing somene in trauma to HGH’s emergency department for life-saving care. Wellington is also an arterial one-way street leading to Hamilton Mountain, which can seem like an invitation for aggressive drivers to burn rubber after a traffic light changes. (Last week, an insurance shopping app said that Hamilton is the second-worst city in Ontario for road wage.)

The release is The Dirty Nil’s first new music since their 2021 album F***k Art was nominated for the top rock album in Canada at the most recent Juno Awards. Hamilton’s The Arkells (Blink Once) were also dominated, but The Beaches won for their work, Sisters Not Twins (The Lovers Album).

The Dirty Nil, who formed in 2006 in Dundas, keeps tight ties to Hamilton. The band members have appeared in the Hamilton-set comedy series This Is The Thing, and were also the halftime musical entertainers during the Hamilton Tiger-Cats’ Labour Day Classic football game in 2021.

Big Bear convenience stores are a fixture in Hamilton, with 18 locations across the city, most of which offer some grocery items in addition to snack food and soft drinks. It also has locations in Burlington, Milton and Kitchener.