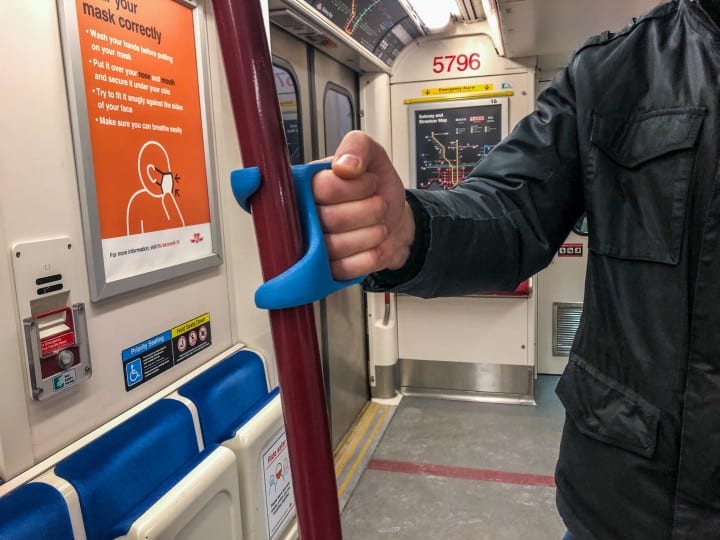 Many Canadians are getting a hand from gadgets meant to help keep fingers off high-touch surfaces, but Toronto’s public health authority says people should be careful how they use them.

While devices that allow people to open doors, press elevator buttons and hang onto bus or subway poles are being marketed as a way to limit exposure to COVID-19, Toronto Public Health said such items are unnecessary and may pose their own risks.

If you’re washing your hands or using hand sanitizer, covering your face with an elbow or tissue when you sneeze and using your arm to push buttons and open doors, “using an additional device or tool when in contact with high-touch surfaces is not required,” said a spokesperson for the health authority, in an email.

“These devices themselves may also become another high-touch surface and will need to be cleaned and disinfected often,” they added.

TPH’s warnings don’t appear to have deterred shoppers or entrepreneurs.

A quick search of e-commerce platforms reveals dozens of Canadians making and marketing such products and even more international businesses shipping them to customers within the country.

Troy Cosby, an Ottawa machine shop worker, is behind one of the many gadgets available, but unlike others, he said his addresses Toronto Public Health concerns.

His LINC looks like a hook with two knuckles attached to it and comes in aluminum, plastic and copper-plated versions that can be used with touchscreens or buttons and can pull open doors, even if they have rounded knobs.

“We went the extra mile to make sure that our tools are antimicrobial, or have antimicrobial properties … to keep it cleaner,” said Crosby.

He also had concerns like TPH’s in mind from the start and designed it to be carried on a lanyard or to hook onto bags and belts, so users are reducing their contact with parts of it that touch handles or other surfaces.

The KoalaGrip — a removable handle that can attach to transit poles or pull open doors — also currently comes with a carabiner, which can clip the gadget to a bag when not in use, minimizing contact between users and handles or poles.

When asked about TPH’s concerns, founder William Martin said in a statement Thursday that “It’s important to have options like the KoalaGrip to give people a stronger sense of security and some confidence to access familiar spaces.”

Martin, his cousin and his girlfriend came up with the device after having to commute during lockdowns.

“Public transit was pretty sketchy before, but then with (coronavirus) it was almost a no-go,” said Martin, in a call from B.C. on Wednesday.

“We bought some bikes for the summer, but didn’t really have a solution for the winter.”

They sketched prototypes on a napkin roughly three months ago, hired a designer on freelance platform Upwork and found a 3D printer in Toronto to make the devices.

By late February, they were selling the grips to people across Canada, Europe and Asia and marketing solely on TikTok, where they racked up hundreds of thousands of views on demonstration videos filmed on Toronto Transit Commission vehicles.

While the transit commission hasn’t thrown its support behind individual products, it said in an email, “we understand that people are looking for ways to stay safe on the TTC and if they want to use doodads, gadgets or gizmos like these, we don’t have any concerns.”