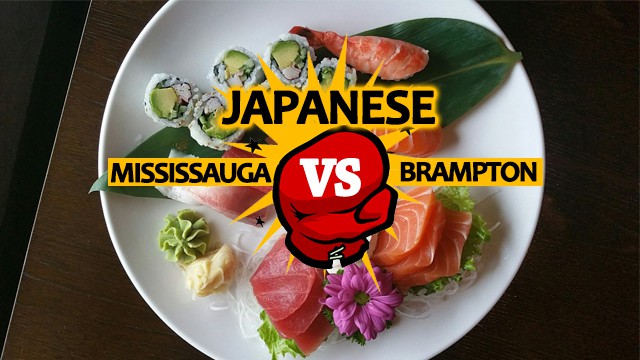 There is no battle more serious and important than the battle between two cities vying to be recognized as the best place to go for exceptional Japanese food.

We at inSauga.com and inBrampton.com have searched far and wide for the best Japanese cuisine in both cities and our Top 5 picks are about to battle it out—and you can vote on your favourite in the poll below.

When it come to great Japanese food, every ingredient counts. Is the tempura batter crispy and flavourful? Is the sushi fresh and well-presented? Is the udon generously portioned and comforting? Are the bento boxes droolworthy?

Both Mississauga and Brampton are known for their respective food scenes and both offer a ton of commendable Japanese joints—but only one city can have the absolute best hotspots.

So, here’s a look at each city’s best spots on our signature Top 5 lists on inSauga.com and inBrampton.com.

Which one would you prefer to chow down on tonight?

When you’re hungry, nothing beats a filling dinner at an elegant Japanese resto. Mississauga has some choice hotspots for the timeless cuisine, including the ever popular Iron Chef restaurant at Tomken and Eglinton, the popular Dai Ichi Sushi in the city’s west end, the well-known Sushi Tei, the long-standing Masamune and our number one pick, the well-loved Heartland Town Centre-area Hinote. While Hinote is our proud number one pick, all of the places will leave you more than satisfied when you’re in the mood for a truly tasty dinner. Brampton, a big and bustling city with an enviable food scene, offers a ton of options when it comes to Japanese food. Some hot spots to check out? The Queen and Kennedy hotspot 520 Sushi, the the spacious all-you-can-eat Tokyo Sushi, the popular 168 Sushi Japan Buffet, the elegant and romantic Sushi House and our number one pick, the Japanese-owned Toshi Japanese Restaurant. You can’t really go wrong with any of these joints when you have a Japanese food craving to satisfy.