‘Been here for a couple of years’; Horwath vs. Loomis Hamilton mayoral debate gets personal 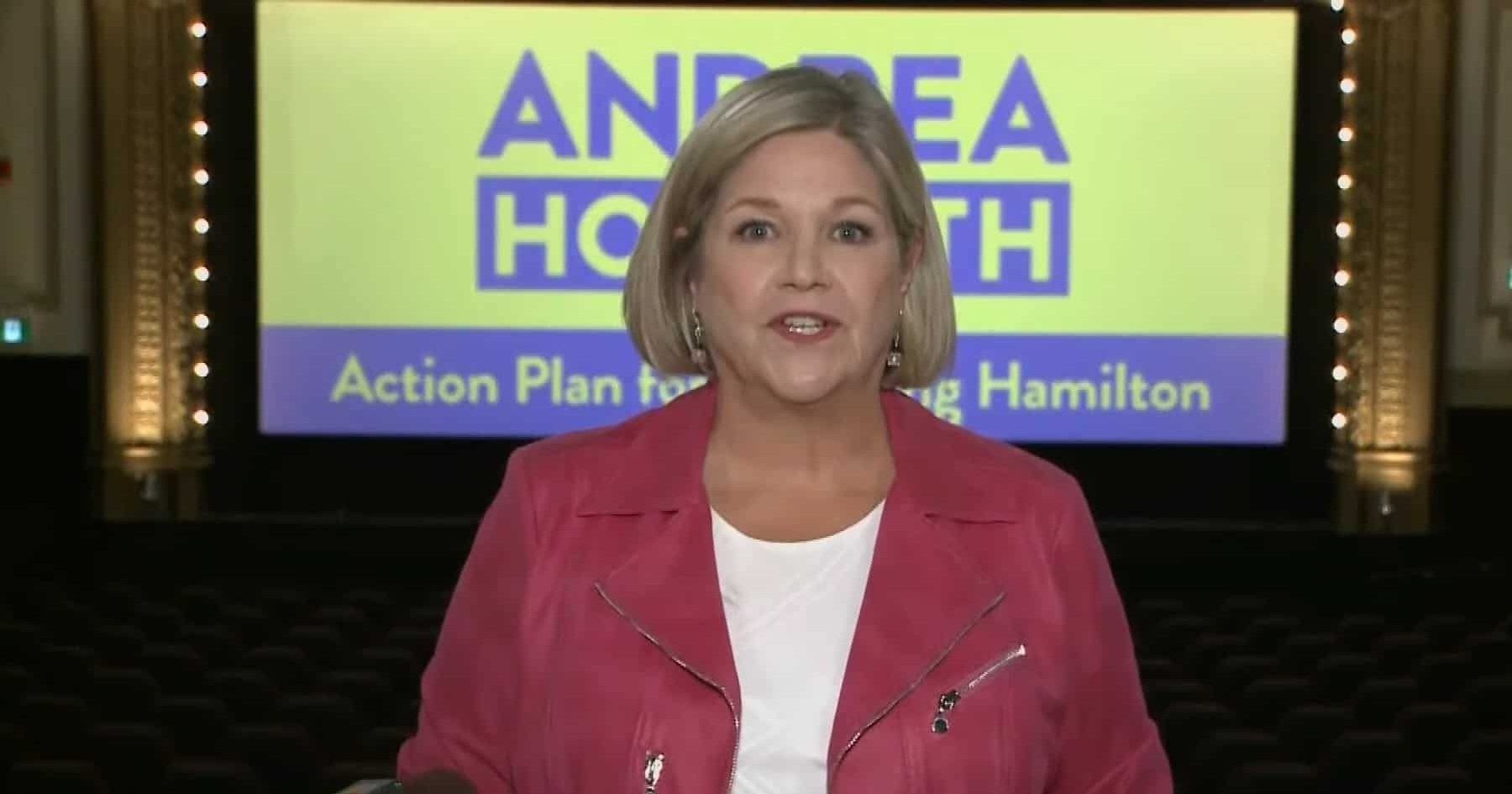 Andrea Horwath closed out a televised mayoralty debate by saying she would represent all Hamiltonians, after a characterization of rival Keenan Loomis that left some wondering who counts as one.

The two main contenders for the top elected position traded shots on Tuesday night. The Hamilton-born Horwath has been in elected office for a quarter-century as a Hamilton city councillor and member of provincial parliament and was the Ontario New Democratic Party (NDP) leader until mid-2022. Loomis was president and CEO of the Hamilton Chamber of Commerce. The contrast in career and life paths led to Loomis trying to hit Horwath over a perceived lack of accomplishments, while Horwath hit Loomis for being an American immigrant.

Bob Bratina, the one-time mayor who is trying for a political comeback, was sidelined due to a COVID-19 infection.

At one point, Horwath referred to her foe as “someone’s who’s been here for a couple of years.” Loomis and his spouse, Trish Loomis, who is a Hamilton native, moved here in 2009 amid a global recession, which hit the United States more severely than Canada.

“But nonetheless, I guess my question would be, what does this person, as opposed to someone who has been ingrained in Hamilton for her entire life and working for Hamiltonians on so many fronts for my entire career, what gives him — someone who’s been here for a couple of years, who’s managed a small organization with a handful of staff and a small budget, has the capacity, the knowledge, the understanding to be the mayor of the City of Hamilton? To just walk in and be the mayor of the City of Hamilton?

“I really don’t understand where the chutzpah comes from.”

Whether that comment has any effect at the ballot box before polls close on Oct. 24 is up to the Hamilton electorate.

The drive-till-you-qualify realities of the housing market means that many people from other parts of Southern Ontario have moved into the city in the last decade, replacing longtime residents. Hamilton is also making net gains in secondary migration, which means the number landed immigrants settling into the city from other parts of Canada exceeds the number who are trying their luck elsewhere.

Loomis riposted that Horwath was being “disrespectful” to people who have made their homes in Hamilton. He also played up his work with McMaster Innovation Park, claiming some purchase on how the tech sector has soften the blow of de-industrialization.

“I think that’s disrespectful to all the people in Hamilton who weren’t ‘born-and-raised,’ ” Loomis said, putting air quotes around the last three words. “I married into Hamilton, I’m lucky enough that I was in a position to move here with my family in 2009. And Hamilton is a city that I quickly fell in love with. And I saw that it was a city that could be so much more, because it had been so much more, as well.

“I immediately stepped in and began contributing… I started at McMaster Innovation Park, working with McMaster and all the other great talent that’s in this community, and then I got the job as the president and CEO of the Hamilton Chamber of Commerce, representing 1,000 businesses that employ 75,000 people in this coummunity. I know the issues inside and outside because I have been representing the business community at several tables, 25 different committees representing 25 different issues.

“We need great leadership in this community to be able to live up to the potential that we have there. We so many challenges, but we have so many opportunities… we need someone with a business mind who can focus beyond the next election cycle and on what this city can be in 2050 when our kids are in their 20s and 30s.”

Clip #3:
Starts with Horwath's challenge of Loomis' leadership of the Chamber as a "small org" only here "a couple of years", Loomis' response, Horwath's closing stating she plans to be the Mayor for all Hamiltonians. #yhmvote pic.twitter.com/VcoPAyiMjd

The Loomis campaign team seems to have seized on the remark. On Wednesday morning, it shared a video of Trish Loomis explained how she and her spouse lived in the basement of her parents’ Hamilton Mountain home when they were first came here in 2009.

No matter how long you’ve lived here, your love for #HamOnt will always make it home.

“I may have brought Keanin to Hamilton, but he made me fall in love with Hamilton.”

Hear @trish_loomis talk about her and Keanin finding home and raising a family in our city. pic.twitter.com/uetej2qmH3

Margaret Bennett, who part of the Loomis team, also tried to spoof the remark. Bennett, who is from Toronto originally, stood as the Liberal candidate in Hamilton Centre — while Horwath was the MPP — during the 2021 federal election. She shared a photo of herself receiving an award from outgoing Mayor Fred Eisenberger with a mock apology.

“Apologies to #HamOnt Centre for running for office before the appropriate time spent in the city,” Bennett wrote. “Please let me know when I have been here long enough to contribute.

“Thanks (Mayor Eisenberger) for not having a time prerequisite for awarding the Order of Hamilton. Still humbled.”

Apologies to #HamOnt Centre for running for office before the appropriate time spent in the city. Please let me know when I have been here long enough to contribute.

Thanks @HamiltonsMayor for not having a time prerequisite for awarding the Order of Hamilton. Still humbled. pic.twitter.com/kX6Y807b42

Horwath announced July 26 that she would try to become the first female mayor in the 175-year history of the office. She spent 18 years at Queen’s Park, including four as the Official Opposition leader opposite the Premier Doug Ford-led Ontario PC Party government.

In the 1990s and early aughts, she was thrice elected as the Ward 2 city councillor, and her advocacy for firefighters who acquired lasting injuries while putting out the 1997 Plastimet industrial fire effected lasting change in benefits for first responders.

‘Do your homework’ vs. portrayal of politics as usual

Horwath brought up the Plastimet response when Loomis tried to get her to name “five tangible things you have done for Hamilton in the last five years.” She rejected the premise of that question, calling it “uneducated.”

“You can do your homework and look it up for yourself,” Horwath said to Loomis. “I know how to get things gone, and where to get things to done.”

Loomis has not held elected office, but he was the first person to declare his intentions, back on Jan. 19. On Tuesday, he tried to saying that voters are put off by endless partisanship in public life.

“I’m listening and evolving as a candidate and I think that’s exactly what people of Hamilton want to see,” he said. “I do not think that what we need is more partisan experience. That’s not really what we need. There’s nothing there behind that, except experience being politician.

“I’m not a neophyte in this commuity at all,” he said.

(Per dictionary.com, “chutzpah” is a noun meaning “shameless audacity; impudence.” “Neophyte” means “a beginner or novice.”)