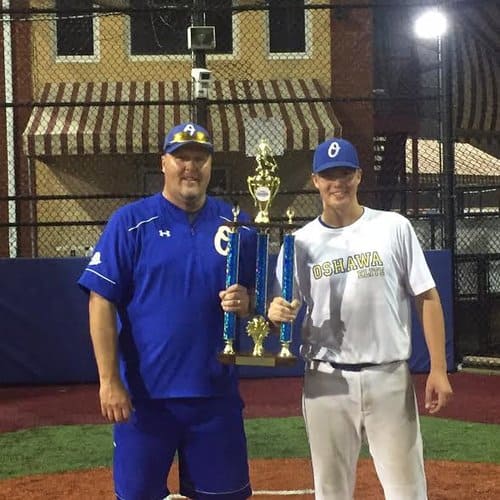 The long-time boss of Oshawa baseball (16 years) and even longer Athletic Director at Durham College (26 years) was named as the 2021 President’s Award winner Saturday night.

“I am very honoured to have received this award from Baseball Ontario,” said Babcock, who went on to credit others. “I consider it a team award for Baseball Oshawa and its amazing volunteers and board members.”

Babcock, who hails from Brockville, began coaching baseball in 2005 and eventually took over as Baseball Oshawa president in 2012. Under his guidance, the association has implemented many programs and initiatives and was one of only a few associations to offer kids organized baseball during the past two pandemic summers.

He was inducted into the Oshawa Sports Hall of Fame in 2019.

The Junior Legionaires won the first national championships in the association’s 70-year history in 2019 under Babcock’s watch and the organization has sent many players on to scholarship in the United States as well.

Former Baseball Oshawa President Mark Orton was awarded the Director of the Year Saturday night and two players on the Whitby Canadians – Matthew Gaspar and Ryan McGivney – were honoured as Rep Player and Rep Pitcher of the Year (14-plus) respectively.

The Eastern Ontario Baseball Association was also named the Affiliate Association for 2021.