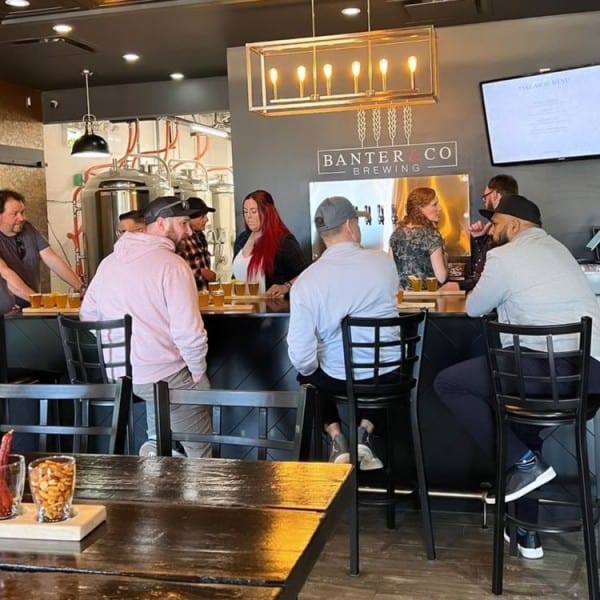 The Brooklin beer scene just got a big boost with the grand opening of Banter & Company, Whitby’s fifth craft brewery and the first in Brooklin.

Banter & Company, a partnership between the two founders, a brother, and a best bud, had a few ‘soft’ openings over the past few weeks but held their official opening Saturday at their downtown digs at 66 Baldwin Street, a half-block north of Campbell Street.

Opening a brewery was the dream of co-founders Dan Bastas and James Mercier, who got the ball rolling in 2020 and a year later invited Dan’s brother Johnny, the proprietor of the popular Johnny’s Cuts barbershop in downtown Oshawa, and his business partner and best pal Adrian James to join the company as minority partners.

That’s when Banter & Company was born and Dan Bastas, who is chief of Operations, said they hope to be here for the long haul.

“We are community-based,” said Bastas, who grew up in Bowmanville but has lived in nearby Ashburn for the last dozen years. “We’d like to grow, but we will just see where we can take it.”

Located in the Victoria Place building in the heart of Brooklin’s downtown, Banter & Company opened with four beers in their lineup and not a fancy name among them.

“We decided to go minimalist with our labels and our beer names,” noted Bastas with a smile. “Just the basics.”

Mercier, who handles the brewing, settled on a New England Pale Ale (which, at 6.5 per cent, is really an IPA), a Session IPA, a Blonde and a Belgian Wit, with an Irish Stout and ESB next on the list and likely ready for drinking in another month.

A Black IPA, an Imperial Red Ale and  a Brave Noise Pale Ale are also among the future plans.

‘Market demand’ was part of the reason for the brewery’s first four styles, Mercier explained. “You need those four to start. Especially the Blonde for those like an easy drinking beer.” 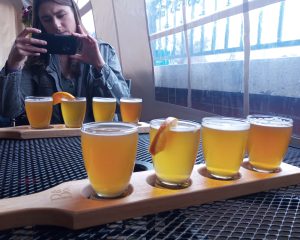 (For the record, all four styles passed with flying colours with this writer and his drinking partner. Especially the New England Pale Ale, which was smooth and gave me a big dose of citrus and a satisfying bitterness at the back end.)

Bastos said he was very pleased with the turnout for the grand opening, which packed the house quickly after the 1 p.m. ribbon-cutting and led to a waiting list for tables. “It’s been very solid. We knew it would be busy just by the responses on social media but this is way more than satisfying.”

Bastos, who was busy most of the day taking orders, bussing tables and generally staying two steps in front of busy, said he was also happy with the collaborative nature of other breweries in the area in giving advice on their start-up.

“The craft beer community welcomed us with open arms,” he said. “It’s a great environment to be working in. 5 Paddles (Whitby) and Chronicle (Bowmanville) in particular really helped us out.”

“This is all new to us and it’s a very supportive community.”