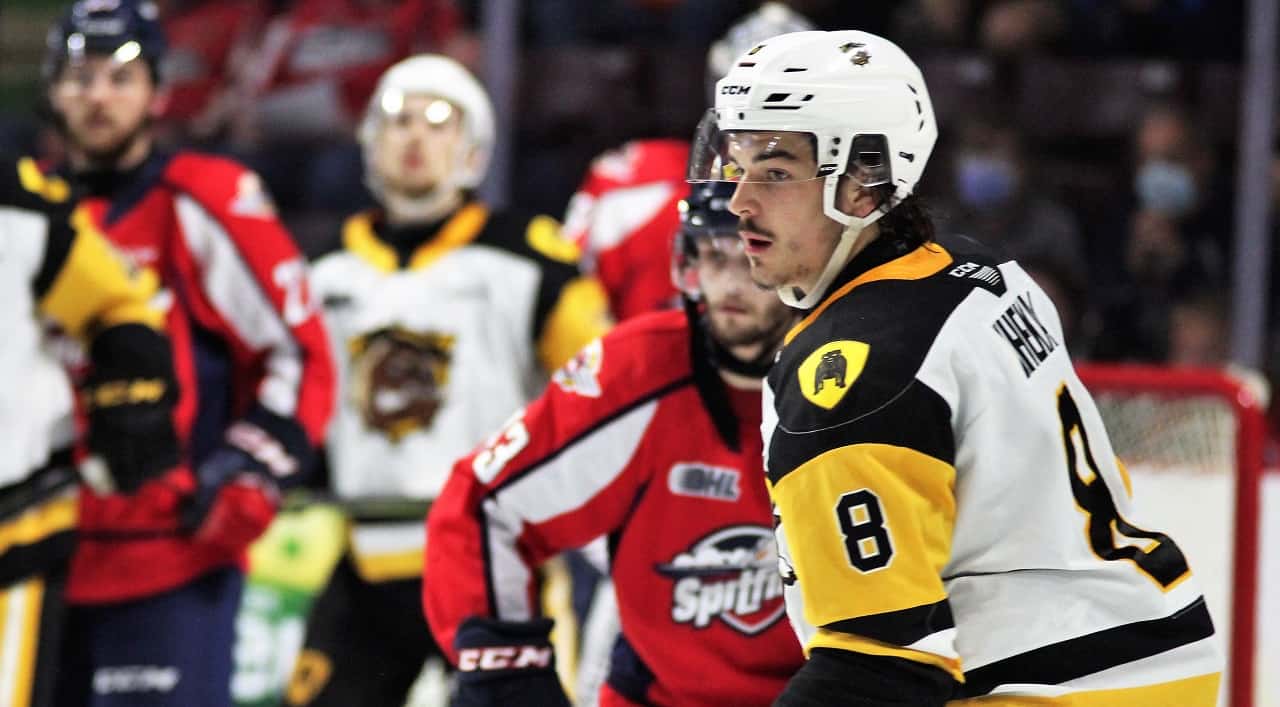 Of course, the longest season the OHL has ever had would include a winner-take-all Game 7 in the final.

In just a few minutes of game time bridging the second and third period on Monday, the ice tilted on the Hamilton Bulldogs, who had wrested a well-earned second-period lead against the Windsor Spitfires through two goals from Logan Morrison. But faced with elimination, and backed by a sold-out crowd, the Spitfires surged ahead with two goals in 46 seconds within the final two minutes of the second. Mississauga native and ex-Bulldog Michael Renwick got the go-ahead goal, which stood up as his second game-winner of the series.

A scrum broke out after the buzzer sounded to end the period, and Bulldogs overage defenceman Arber Xhekaj was given the extra minor as he and Windsor’s Andrew Perrott were both penalized. On the ensuing power play to the start the third, New York Rangers prospect Will Cuylle scored what stood as the dagger goal that sealed the Spitfires’ eventual 5-2 win. As a result, the two teams, dead even at 3-3 in the best-of-seven series, will do it all again at FirstOntario Centre at 7 p.m. on Wednesday (June 15).

The Bulldogs did not lose a game during the first three rounds of the playoffs. The Spitfires had to win Game 7 against the Flint Firebirds in the Western Conference final. Windsor had a shutout win at home in the winner-take-all game.

It is the first time since 2013 that the OHL final has required the full seven games. The winner will get a four-day respite before facing the Saint John Sea Dogs in the tournament opener at the Memorial Cup on Monday.

The junior season usually ends in May. But this campaign was already extended a month due to the fifth wave of the COVID-19 pandemic in the winter.

While there likely is not a player in either dressing room without some bumps and bruises, the health of two frontline Bulldogs is in question. First-pairing defenceman and captain Colton Kammerer has been out since Game 2 of the series. Seattle Kraken forward prospect Ryan Winterton was also unable to play Monday after suffering an injury in the first period of Game 5 on Friday.

Morrison, whose 17 goals in the playoffs are one shy of the franchise record that Grimsby native Brandon Saigeon set during the 2018 Bulldogs’ championship run, gave the Bulldogs their only lead at 10:46 of the second period. It was classic dirty-area Morrison goal, as he alit from behind the goal to redirect a point shot, then backhanded home the rebound before Spitfires goalie Mathias Onuska could recover.

A few minutes later, OHL player of the year Wyatt Johnson got a break and was slowed down by Bulldogs defenceman Nathan Staios, who appeared to cleanly lift Johnston’s stick to nix the opportunity. The WFCU Centre crowd of 6,378 booed the no-call by referees Dave Lewis and Jason Faist, and engaged “We want a ref” chants.

From that point, the Spitfires got the next four power plays. The Bulldogs did not get the extra man again until there was 2:05 remaining and they were down by three goals.

Dundas native Jacob Maillet and Burlington native Oliver Peer assisted on the game-tying goal by D’Amico with 1:16 left in the second. The helper was Maillet’s third point in the last four games.