As CUPE strikes over Bill 28, here is how Hamilton politicians are reacting on Day 1 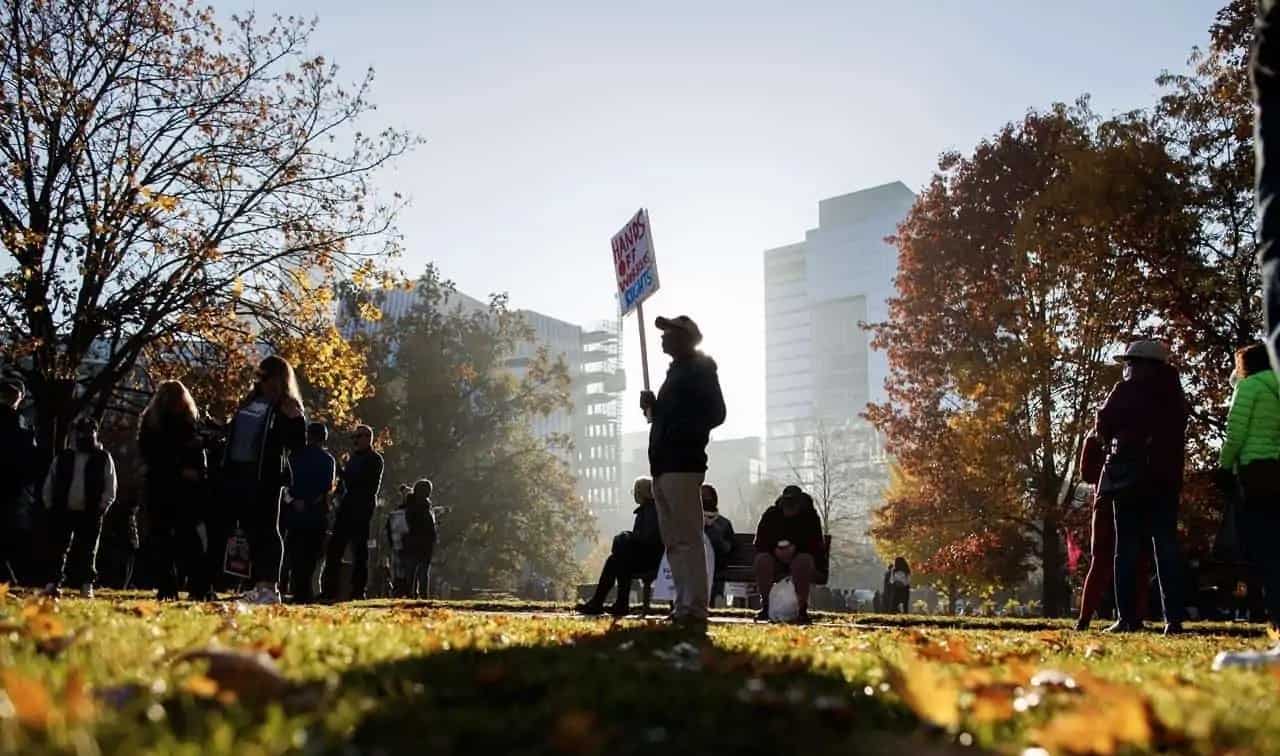 There has been a gamut of reactions, and a lack thereof, in Hamilton from elected leaders who are in between public outrage and a hard place with the Ontario government.

At this writing, about 1,500 education support workers in Hamilton school boards who are CUPE-OBSCU members are off the job. The majority-female provincewide workforce of 55,000 went on what is, for now, an illegal strike since the Premier Doug Ford-led PC Party of Ontario government and Education Minister Stephen Lecce on Thursday passed Bill 28. Entitled Keeping Students in Schools Act, it uses the Section 33 notwithstanding clause of the Canadian Charter and Rights of Freedom to override portions of the charter in order to impose a four-year contract.

Critics have said it tramples on Charter-protected bargaining rights.

Ford was not present for the Bill 28 vote on Thursday evening. A CBC Sports reporter later shared a photo of him at a Humber River Hospital Foundation gala dinner.

Hamilton Centre MP Matthew Green and his fellow New Democrats in the House of Commons pushed on Wednesday for an emergency debate over Ontario invoking the notwithstanding clause. Green, a former Hamilton councillor, described it as “authoritarian use” of Section 33 against “some of the lowest-paid public sector workers.” That didn’t get very far. Such a motion requires unanimous consent from all MPs who are in the house.

Municipalities and school boards in Ontario are, by law, creatures of the provincial government. However, the strike is affecting City of Hamilton services that are relied on by families, whom presumably just voted in the Oct. 24 municipal election where Mayor-elect Andrea Horwath, 15 city councillors — including nine new ones — and 22 school trustees received a four-year deal. Hamilton also has a strong history of union activism, which may put people in the middle politically, even though they are paid by the public. (School trustees are not full-time employees.)

Mayor-elect Horwath, who was Ford’s electoral rival twice and Ontario official opposition leader for four years across from him in the legislature at Queen’s Park, won the top elected job in the city in the Oct. 24 election. Horwath has not, at least through social media as of early Friday (Nov. 4), commented on the CUPE-OBSCU strike through her social media.

Re-elected Ward 3 Coun. Nrinder Nann did just that. Nann was a staff member of Green’s during his stint as Ward 3 representative.

If you have some time today to join education workers at Limeridge Mall, hundreds of workers and supporters are already pounding the pavement. I joined them for a bit before meetings got going this morning. Glad to see superhero Rose, horns at the ready! #HamOnt pic.twitter.com/y5WPgfyxqw

Incredible to see so much solidarity today across three picket locations here in #HamOnt in support of education workers @osbcucscso and to denounce the Ford Govt trampling on worker’s rights. “We will strike for as long as it takes” – @roseallain0221 pic.twitter.com/8BBM7LdCNI

The Hamilton-Wentworth Catholic board (HWCDSB) switched over to remote learning due to the absense of essential employees. Hamilton-Wentworth (HWDSB) public board opened schools on Friday, although re-elected Ward 7 trustee and chair Dawn Danko told CBC Hamilton that she went to one of the protests, and affirmed that Ford is “trampling” workers’ rights.

In the same report, a leader of a CUPE local expressed doubt that HWDSB will be able to keep schools open much longer.

She says she was on the picket line today.

Renter, climate justice and social justice groups in Hamilton have also demonstrated this week against Ford and the PCPO’s Bill 23, which is entitled the More Homes, Built Faster Act. At least one Hamilton councillor — Ward 9 Coun. Brad Clark, a one-time PCPO cabinet minister — has expressed, through Twitter, some grave concerns about the bill forcing conservation authorities to put up heritage greenspaces for sale to developers.

The Association of Municipalties of Ontario also had a rapid response last week to “troubling features” of Bill 23.

Ward 13 Coun.-elect Alex Wilson also retweeted information about a protest againsts Bill 23 that Hamilton ACORN led on Thursday outside of Lumsden’s Hamilton East—Stoney Creek constituency office. Wilson and Ward 12 Coun.-elect are cofounders of the Save Our Streams Hamilton wetlands-protection coalition.

The House of Commons is currently sittin in Ottawa. Besides the NDP’s Green, Hamilton is represented by three Liberals — FedDev Ontario Minister Filomena Tassi, Chad Collins and Lisa Hepfner — and one Conservative, Dan Muys.

Provincially, where Bill 28 rests, Hamilton has 2 PCPO MPPs and two NDP MPPs apiece. Hamilton Centre is vacant since Horwath resigned to run for mayor. Sarah Jama, a social justice activist in Hamilton, was acclaimed on Thursday as the NDP candidate for an upcoming byelection.

Jama tweeted shortly after 7 a.m. that she would join the protest outside of Lumsden’s constituency office.

Good morning y'all! SO pumped to join picket lines in an hour as the official @OntarioNDP Candidate in Hamilton Centre! Let's show this government that #HamOnt is not messing around. We stand with workers.

During the previous stint that the PCPO (full name: Progressive Conservative Party of Ontario) was in power, it was not unheard-of for its Hamilton MPPs to meet with protesters. Both Clark and Toni Warnica were known to do so during that period.

Messages to both PCPO MPPs, Lumsden and Donna Skelly (Flamborough—Glanbrook) regarding the possibility of them meeting with constituents who are affected by Bill 23 and Bill 28 were not immediately returned.

Lumsden’s last post showed him in Hamilton, meeting with Hamilton Chamber of Commerce president and CEO Greg Dunnett. They appeared to be at Relay Coffee, which is not in his riding.

Lumsden wrote the meeting was to discuss “our ongoing collaboration to support and strengthen local business.”

Since 1845, the Hamilton Chamber of Commerce has been a steadfast voice for business in our community.

This morning I met with @HamiltonChamber President Greg Dunnett to discuss our ongoing collaboration to support and strengthen local business.#HamOnt #Hamilton #StoneyCreek pic.twitter.com/V2CZ4ofMxi

Money, which is one of the issues in the labour impasse, is used to purchase goods and/or services. Those would be sold at most, if not all local, regional and national businesses with locations in Hamilton.

The most recent post from Skelly shared information about how consistuents could show support for veterans ahead of Remembrance Day on Nov. 11.

As we approach Remembrance Day, support Veterans by picking up a lawn sign and a poppy from the Waterdown Legion.

An estimated 1.159 million Canadians and Newfoundlanders, some still living, served in the Second World War, the most recent global conflict. The Allieds’ victory against the Nazi-led Axis in that six-year global conflict (1939-45) kept the door open for Canada to repatriate the constitution 3½ decades later. The Charter was passed in 1982.

Both Hamilton NDP MPPs, Monique Taylor and Sandy Shaw, joined the opposition outcry against at Queen’s Park earlier this week.

Across Ontario, many schools are closed as a result of the job action by the union, which represents custodians, administrative staff, education assistants, bus drivers and librarians. Other unions are set to join them on the picket lines.

— with cover photo and files from The Canadian Press